Brandy’s husband was named head coach of the Auburn Tigers men’s basketball program in 2014, he previously served as head coach at Tennessee, Milwaukee and Southern Indiana.

Born Bruce Allan Pearl on March 18, 1960; the Boston, Massachusetts native received his bachelor’s degree in business administration from Boston College in 1982; and began his coaching career as an assistant at Stanford and subsequently at the University of Iowa.

He’s been married to wife, Brandy for a few years. 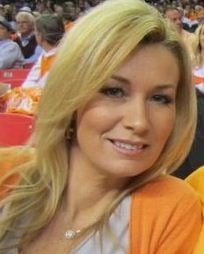 Brandy Pearl was born Brandy Rena Samuel on April 30, 1974; the daughter of Rena Kay Dean. She has a younger brother named Marc. She is a native of Sevierville, Tenn.

She is actually Bruce’s second wife, the coach was previously married to Kim Pearl with whom he has four adult children Jacqui, Leah, Michael and Steven Pearl.

Steven is an assistant coach to his father at Auburn, Leah a Dance Instructor at Mercy HealthPlex is now married and goes by the name of Leah Ball.

Jacqui is an executive director at Koinonia Foundation, Michael Pearl is a junior at Auburn University.

Brandy who was also known as Brandy Miller, began dating Bruce Pearl around 2008. The two had a brief engagement and became husband and wife on August 29, 2009. That means the couple will be celebrating their 10th wedding anniversary this year.

Brandy who often shares images of her and her hubby along with the couple’s pet dog, Stewy –keeps active on social media on Twitter and Instagram –where she calls herself ‘Follower of Jesus’ ‘Artist Wannbe’ ‘Sugar Addict’ and ‘Introvert’