The 20-year-old power forward, who is also capable of being a small-ball center recently played his first NBA game at Madison Square Garden.
And even though the Pelicans lost to the Knicks, Williamson was over the moon about playing in the iconic venue saying I mean, New York is the mecca of basketball,” “I love playing here.”

Zion Williamson was drafted by the New Orleans Pelicans in 2019, with the first pick in the 2019 NBA draft. He officially signed with the NBA team on July 1, 2019. He made his professional basketball debut on January 2020.

He also made headlines in 2020 after he pledged to pay for the salaries of all the employees of the multi-purpose indoor arena Smoothie King Center in New Orleans, Louisiana, USA for 30 days during the suspension of the 2019-2020 NBA season caused by the new coronavirus (COVID-19) pandemic.

Check out his top facts. 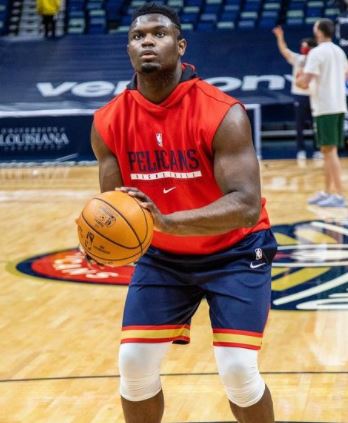 1. His parents who were college athletes, are divorced

He was born in Salisbury, North Carolina, United States in 2000 to Lateef Williamson and Sharonda Sampson. Lateef played football in high school and college while Sampson was a sprinter before becoming a middle school health and physical education teacher.
His parents divorced in 2005. His mother married former college basketball player Lee Anderson.

2. Basketball isn’t the only sport he can play

Williamson is 6’6″ and his listed weight is 285 pounds. While his weight is considered heavy for a basketball player, he is known for his speed and leaping ability.
In addition to basketball, Williamson also played soccer and football before joining the NBA.

3. His mom used to be his coach

His mother was his coach when he played for the Sumter Falcons on the Amateur Athletic Union (AAU) circuit before middle school.
He attended Johnakin Middle School in Marion, South Carolina, USA. He joined the school’s basketball team with his mother as his coach.

4. He received a college basketball scholarship

In 2016, Zion he received a college basketball scholarship offer from Duke University in Durham, North Carolina. As a Duke Blue Devils player, he was named the Atlantic Coast Conference Athlete of the Year for the 2018-2019 academic year.

5. He signed a millionaire shoe deal

Back in 2019, Zion signed a five-year shoe deal with the Jordan brand worth $75 million, the second largest rookie shoe deal in history next to the $90 million rookie deal LeBron James signed in 2003.