Hunter Mar is the gorgeous girlfriend of NBA player, Zach LaVine –her beau is currently a player with the Chicago Bulls.

Hunter’s NBA stud is perhaps having one of the most important moments in his career. The 22-year-old was born March 10, 1995; the Washington native is the son of Cheryl Johnson-LaVine and Paul LaVine.

Zach played college basketball for the UCLA Bruins before being selected in the first round of the 2014 NBA draft. LaVine went from being the state’s top high school player to being named one of the top freshmen in the Pac-12 Conference, helping lead the Bruins to the sweet 16 in the 2014 NCAA Tournament.

After one season at UCLA, Zach was selected 13th overall in the 2014 NBA Draft by the Minnesota Timberwolves. He was traded to the Bulls earlier this year.

Zach has been known to credit his family and his lovely girlfriend for his NBA success. Let’s meet the very lovely Hunter Mar below.

Hunter Mar was born February 10, 1997 and attended Kentridge High School in Kent, Wash. graduating in 2015. She and Zach met while attending high school and have been dating since. She gained major notoriety for her link to the NBA star. 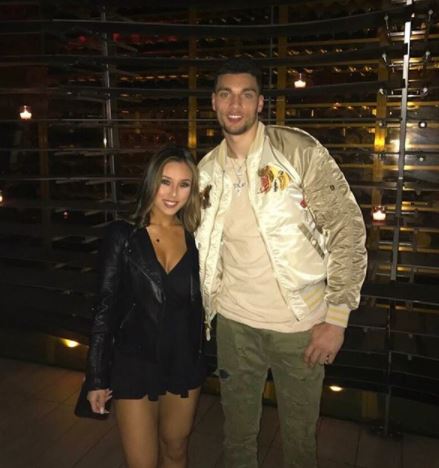 Hunter who is also a Washington native is currently a college student.  One of three sisters, miss Mar has become quite popular on social media. She currently has over 40k followers on Instagram.

Hunter Renae Mar was born in Renton, Wash. Her parents are Ryane and Toni Mar. She grew up with older sister, Haeley, and younger sister, Kaiya.

Hunter Mar and her boyfriend actually have a lot in common, they both like sports as a profile for the pretty brunette, shows she is a member of the women’s soccer team at Seattle University –where she is currently pursuing a degree in business. Hunter is a midfielder player and served as team captain of Washington Premier FC (2013-15).

Hunter Mar might be tiny but she sure is a big influence for LaVine.