You are here: Home / NBA / Who is Enes Kanter’s Girlfriend?

Enes Kanter, the 25-year-old NBA player we all know for playing with the New York Knicks and for being ‘stateless’ seems like one heck of a catch!

Though the once Turkish native appears older than he looks and you’d think he’d have at least a couple of kids and a lovely lady waiting at home by now; Kanter’s budding career in the NBA should be enough for now.

Born to Turkish parents Mehmet and Gulsum Kanter -while his father studied in Switzerland, Enes was publicly disowned by his family and later had his passport cancelled by the Turkish embassy. He got himself kicked out by his family and homeland after he became a supporter of a Pennsylvania-based cleric named Fethullah Gulen, a “persona non grata” in Turkey and after he heavily criticized the Turkish president on Twitter. His younger brother Kerem is also a basketball player.

Kanter’s life might seem a little complicated since he has become a man without a country, however his status as a talented NBA player will sure help him with the ladies. 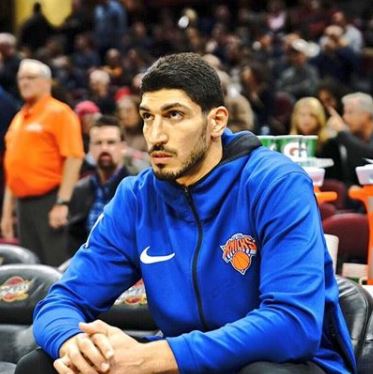 The big man made his debut for the Turkish national basketball team in the 2008 FIBA Europe Under-16 Championship. The Turkish center was selected third overall by the Utah Jazz in 2011 and was named the team’s starting center in 2013. A 2015 trade sent him to the Oklahoma City Thunder and last September another trade sent him to the Knicks.

Enes Kanter finished the 2016-17 season with an average of 4.9 points per 36 minutes off of the pick and roll. He also averaged 1.14 points per play via the pick in roll in 2016-17, which ranked No. 16 in the Association. Standing at 6 ft 11 in, the center appears to be currently single as no sign of any females are spotted on his social media.