Rudy Gobert – Who is His Girlfriend?

Rudy Gobert, the French NBA player who is well known as a centre with the Utah Jazz, is apparently not seeing anybody.

Rudy got his start playing basketball at his hometown club, JSC Saint-Quentin. He debuted with Cholet Basket in the French League in 2010. In his final season with Cholet, 2012/13, Gobert increased his average to 8.4 points and 5.4 rebounds per game.

His recent stunt of touching all the microphones and recorders on the interview table will undoubtedly become a flashpoint in the coronavirus outbreak for the league and the subsequent season suspension. 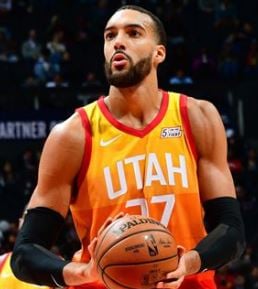 He was drafted in the first round of the 2013 NBA draft after being selected by the Denver Nuggets and made his NBA debut with the Jazz after being traded that same day.

His 7 foot, 8 1/2 inch wingspan was the largest wingspan ever recorded at the 2013 NBA Draft Combine.

In 2014, he won bronze at the FIBA World Cup as a member of the French national team. He was also the NBA blocks leader in the 2016-17 season.

What is Rudy Goberts nickname? 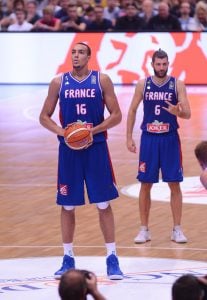 The all-star center nicknamed ‘The Stifle Tower’ -has been quiet about the dating scene. There are no reports of him dating anything in the past as well as the present. He’s pretty much single as of now.

Who is Rudy Gobert’s Mum?

Though it appears there’s no special lady in his life at the moment, Gobert is close to his mother Corinne -who raised him after his parents separated when he was just three years old.

Gobert is quite active on social media, he mostly shares images of his family, his life in the NBA, and the occasional photo with other celebrities.

In 2018, Rudy boasted his custom-made one-piece basketball shoes. He got it customized from an artist named Kickstradomis who is popular for his custom-made artworks. Gobert’s shoes had the character Luffy on both sides and the shoes were painted in red and golden which was a major highlight. You can check out his shoes here.

Who is Rudy Gobert girlfriend? 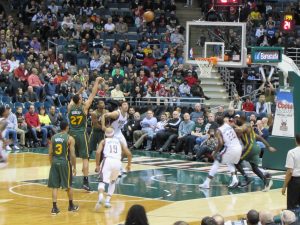 Rudy doesn’t have a girlfriend. There are no rumors about him being in a relationship with anyone. For now, he is single.

Who is Rudy Gobert wife?

Gobert is not married yet. He neither has a girlfriend as far as we are aware. Do you have any information about a girlfriend or love interest? Please drop us a comment in the section below and relieve us of our suspense!

Know more about this tall stud here. Rudy Gobert has His origin, parents, ethnicity, and more.

Where is Rudy Gobert from?

Gobert is from France. He was born in 1992 in Aisne, France.

When did Rudy Gobert parents Split?

When Rudy was barely 3 years old, his parents split and his mum has been taking care of him ever since as his father moved to Guadeloupe after the separation.

What is Rudy Gobert’s ethnicity?

His ethnicity is mixed as his father is black and his mother which makes him an Afro-American.

What is Rudy Gobert’s nationality?

How Old is Rudy Gobert?

Rudy Gobert Age is 28 as of 2021. At such a young age, he has already made it to the top and won several awards over the years.

How Tall is Rudy Gobert?

He is widely popular for his height. Rudy is 7 feet 1 inch tall.

What is Rudy Gobert weight?

Rudy Gobert has hit an all-time record for the most dunks in NBA and is known for his impressive defense.

Check out one of his interviews below. Want to know more about some of the hottest wives of popular players? Check them out in our most popular reader posts here.