Rose Mutombo is the longtime wife of the retired professional basketball player, Dikembe Mutombo –known for his time in the NBA.

Rose’s husband played for nearly two decades in the NBA and since retiring he’s become active in charitable efforts. Most recently the 52-year-old flown a young boy from Africa to received surgery in the US.

Dikembe Mutombo is well regarded as one of the greatest shot blockers of all time. The four-time Defensive Player of the Year and 8x all-star –was born in the capital city of Kinshasa in the Democratic Republic of the Congo.

Mutombo who first arrived in the United States over 30-years-ago on an academic scholarship to attend Georgetown –played in the NBA for 18 seasons. He announced his retirement in 2009 while playing with the Houston Rockets. In 2015, he was inducted into the Naismith Memorial Basketball Hall of Fame. Are you a fan of Dikembe Mutombo? Why not get an autographed basketball photo of Dikembe from here!

In this Article hide
Let’s Meet The Defensive Super Heroes Wife
Know About Dikembe Mutombo’s Family
Who are Dikembe Mutombo’s Children?
6 Interesting Facts about Rose Mutombo
#1 She is also from the Congo
#2 She is a mom
#3 Her husband was supposed to marry someone else
#4 Rose keeps a low profile
#5 She is also into charity
#6 She is into fashion

Before we get to know about his family, check out Mutombo’s top blocks of his career below:

Dikembe Mutombo has a huge family where he has 10 siblings. 10! Oh my goodness his parents REALLY like each other. He is one among the 10 and was born to Samuel and Biamba Marie Mutombo. His father was a principal and Dikembe was well-raised by his father and he knew several languages at a very young age. He knows French, Spanish, English, Portuguese, and 5 other languages which are mainly Central African languages. He also knows Lingala and Tshiluba.

He wasn’t interested in basketball until 16 and it was when he was going to a medical school where he performed exceptionally well in his first year of college basketball and there was no looking back from there.

Who are Dikembe Mutombo’s Children?

Dikembe Mutombo has three children with his wife and four children who were adopted from his wife’s deceased brothers. Mutombo’s son Ryan Mutombo was the 16th best center in high school and it was in 2021 where he committed to play in Georgetown.

Mutombo who graduated with dual degrees in Linguistics and Diplomacy –has always been involved in humanitarian work. He has been married to his wife Rose for many years. Meet her below.

Rose is a lovely woman who adores her hubby. Let’s find out about her family, children, education, and more here. We’ve got six interesting facts about her for you.

#1 She is also from the Congo

So where was Rose Mutombo Born? Rose Mutombo, like her husband, also hails from the Democratic Republic of the Congo. They have been married since 1996. But how tall is Dikembe Mutombo? Well, Mutombo’s height is 6 feet 10 inches. And you might want to know how tall is Rose Mutombo, yes, she is short but we’re not quite sure about her height. 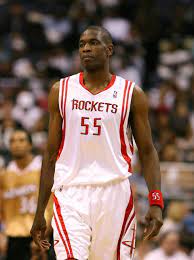 Dikembe and Rose Mutombo are the proud parents of six children, four of them are adopted –and belonged to two deceased brothers; he named his children Reagan and Nancy. Nothing is known about Rose Mutombo’s family as of now. Be sure to check back as we will update when there is something new.

#3 Her husband was supposed to marry someone else

Dikembe was supposed to marry a woman named, Michelle Roberts, however, the wedding was suspended a day prior, because she refused to sign a prenuptial agreement. Maybe fate wanted Dikembe and Rose to be together. They have been happily married for 25 years now!

The supportive wife and mom of six were left to raise a large family while her husband, basketball superstar Dikembe Mutombo, played in the NBA. Though she is often pictured with him, she leaves her hubby all the spotlight. And we’re not quite sure about Rose Mutombo’s Career since she stays out of the limelight. But if we get any information regarding it, we’ll keep you updated. So, stay tuned!

#5 She is also into charity 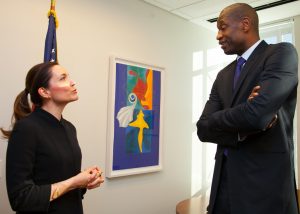 In recent years, the couple has been involved in a number of humanitarian efforts. Last year, they attended the 13th annual UNICEF Snowflake Ball 2017 –and also traveled to Rome, Italy where Dikembe spoke at a session on Advancing Sustainable Development.

#6 She is into fashion

Rose Dikembe is definitely a fashionista and a big shopper. During an interview she spoke about her favorite brands and favorite stores “Neiman Marcus and Saks Fifth Avenue. I also love to shop with international designers such as Karen Miller.  I like their dresses and skirts, they are very feminine and colorful.”

And that’s a wrap about the famous player Mutombo and his wife! Also, did you know that he was right there in Brussels airport during the Brussels bombings? He was one of the witnesses but thankfully he survived. You can check out more about it here.

Are you interested to know more about the wives of famous NBA players? We’ve got it all covered for you. Read on to find out all about the lovely NBA Wives and Girlfriends.