Paloma Ford is the hip hop artist who was in a relationship with NBA guard, Nick Young. The former love birds dated briefly ending the months-long relationship earlier this year.

Ford and Young first got together in September 2016 but the couple allegedly grew apart after only four months of dating. The two were spotted kissing following his split from Iggy Azalea.

But as you know, Nick’s love life is a bit more complicated since he is a daddy to Nick Jr. and daughter Navi –both children born from his on-again, off-again girlfriend, Keonna Green.

Nick made headlines when it was revealed that he had fathered his second child with his son’s mother, Keonna Green, while still dating Iggy.

All that baggage could have taken a toll on Ford who stated she and Young would remain friends.

Was she smart in leaving all the drama behind? Check out 7 interesting fact about Paloma Ford below! 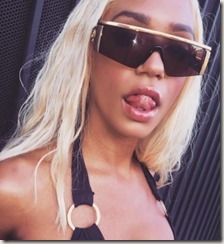 1. She is a California native.

The Pop, R&B vocalist and occasional rapper was born August 1, 1986 in Long Beach, California. According to social media, she attended Lancaster High School.

2. She is former backup singer

She began her career singing background vocals for Macy Gray. She was also featured on Gray’s 2007 album Big.

Ford began releasing her own material on YouTube, her original songs include “Dollars,” “Me´nage a` Trois,” and “Hit of You.”

4. She has worked with big names of the hip hop industry.

Back in 2014, she was featured on Meek Mill’s single “I Don’t Know”. That same year she released “Summer In California” featuring Snoop Dogg and Iamsu!

Reports surfaced in March about a possible relationship between Paloma Ford and Drake. Hollywoodlife claimed Ford was ‘head over hells’ for Drake and he was giving Paloma lots of attention.

6. Ford and Amber Rose are tight

The curvy crooner and model is very close to vixen Amber Rose. The pair were spotted at Coachella and also attended the BET awards together. Amber Rose called Ford her Woman Crush Everyday pick.

7. She has a big following on social media.

Ford sure knows how to keep her fan base entertained, she is an expert in sharing some jaw-dropping shots and as a result she has over 300K followers on Instagram alone.