Carolyn Brown is the lovely and supportive wife of NBA coach, Mike Brown. The two have been married for a long time and are the proud parents of two kids.

Carolyn’s husband who is the current head coach for the Golden State Warriors, was born March 5, 1970. The Columbus, Ohio native, widely regarded as a defensive specialist has also coached for other NBA teams such as the Cavaliers and the Lakers. His brother is former NFL lineman, Anthony Brown. He and his younger brother grew up in a military family and spent their teen years abroad.

Brown graduated from Wurzburg American High School in Wurzburg, Germany in 1988, then played college basketball at Mesa Community College and the University of San Diego. He holds a business administration degree.

He began his career in the early 90’s working with the Nuggets as the team’s video coordinator. In 2000 he became an asisatnt coach for the Spurs. He served in the same position with the Pacers in 2003.

Though being a big time head coach is perhaps one of his greatest accomplishments, Mike couldn’t have done it without the support of his wife, Carolyn. Meet her below.

Carolyn Brown met her future husband while being at a bar in Denver. The two dated for a brief period before tying the knot in the 90’s. Since then, they have become the proud parents of two sons, Elijah and Cameron.

Elijah Brown played college basketball for the Butler Bulldogs. He transferred to the University of New Mexico for the 2015-2016 season. Youngest son Cameron, is a decorated prep football player in Cleveland. 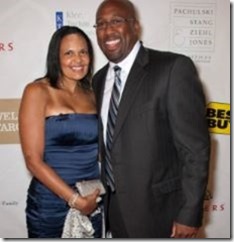 The wife and mother of two was born Carolyn Nancy Mossman on June 23, 1970. She and her husband have been married since 1995, meaning she’s been an NBA wag for over two decades.

Carolyn Brown attended the University of Colorado, where she first studied psychology and then switched her major over to English, with the goal of becoming a school teacher.

In recent years, the NBA wag who keeps a relatively low profile, has been involved in community service. She’s passionate about a number of areas, including education and the prevention of domestic violence.