Marlene Wilkerson is the lovely girlfriend of professional basketball player, Kyrie Irving –currently a player with the Boston Celtics.

Marlene’s NBA stud was born in Australia to Elizabeth and Drederick Irving and he has a sister named Asia.

Kyrie was a standout player at Duke –where he played one season as a Blue Devil under legendary coach Mike Krzyzewski. He was the first overall pick of the Cleveland Cavaliers in 2011 and was named the NBA Rookie of the Year in 2012.

The point guard made his first NBA All-Star game appearance in 2013 and helped lead the Cavaliers to an NBA Championship in 2016. In 2017, he was traded to the Boston Celtics.

Kyrie and current girlfriend Marlene have been dating for a while; meet her below. 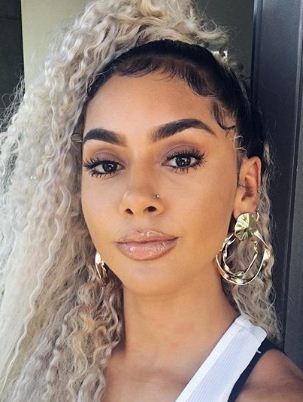 #1 She is his latest quest

Irving has a daughter named Azurie with ex-girlfriend Andrea Wilson. In 2017, he began dating Breanna Barksdale. He dated pop singer Kehlani in 2016.

Marlene is known on social media as Golden and Goldennn_XO; she is an entrepreneur and blogger.

26-year-old Marlene Wilkerson Graduated from San Jacinto High School in 2011 and from California State University-Dominguez Hills in 2015, with a degree in business marketing.

#4 She was a student-athlete

Wilkerson was on the varsity soccer team while at San Jacinto High School. She was initially a right-wing forward, later transition to a left-wing defender. According to her profile she tore her right MCL.

She began her blog and YouTube channel, The Find Guru at the age of 20. On her blog she helps users find the coolest looks, in addition to beauty products and advice.

#6 She worked at Victoria’s Secret

Prior to launching The Find Guru, Marlene was a Marketing Associate at Victoria’s Secret. According to her LinkedIn, she later was a server for the Hillstone Restaurant Group. She also did an internship at Crystal Clean L.A.

#7 She has a dating history

Prior to Kyrie she dated Dexter Strickland, a former Tar Heels basketball player, who briefly played with Kyrie at St. Patrick High School. She has also been romantically linked to PSG player Layvin Kurzawa.

Looking for more of the loves and lives of NBA’s Hottest Wives and Girlfriends? Look no further, we’ve got you covered in our roundup here