He has been playing ball since his high school days at Cardinal Dougherty High School in Philadelphia.

Subsequently enrolled at Villanova University, then two seasons later he declared for NBA Draft. He was selected by the Memphis Grizzlies with the 24th pick in the 2006 NBA draft.

Lowry joined the Grizzlies for the 2006 NBA Summer League. Lowry was traded to the Houston Rockets in a three-team deal during the NBA trade deadline on February 19, 2009. He made the playoffs for the first time that season, averaging 5.3 points, 2.9 rebounds and 2.5 assists in 13 games.

On July 11, 2012, Lowry was traded to the Toronto Raptors, the team who have given him the credit for helping the franchise on the map after winning an Atlantic Division title for the first time in seven years.

With the Raptors, Lowry has been a two-time NBA All-Star, voted in as an Eastern Conference starter in 2015 and 2016, and was named to the All-NBA Third Team in 2016. He has appeared as a member of the U.S. men’s national team, winning a gold medal at the 2016 Summer Olympics.

Lowry signed a four-year, $48 million extension with the Raptors in July 2014.

No doubt Lowry has made Toronto his home. And with fame comes great responsibility and that also applies to Lowry’s wife, Ayahna Cornish. They both are big names in Toronto. 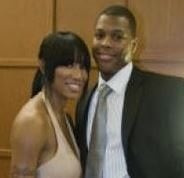 Ayahna Cornish-Lowry is not the typical model wag. She not only played some ball in her time (as a pro basketball player), but is also a charity maven via the Lowry Love Foundation.

Ayahna Cornish was born February 2, 1985. The Pennsylvania native is the daughter of Cherise Cornish and Ramone Moore.

Ayahna Cornish also attended Cardinal Dougherty High School. There she not only met her future husband but was also a basketball player. She averaged 18.7 points, nine rebounds and seven assists as a prep senior.

By the time Ayahna graduated from Dougherty she had set a school record with 1,782 points during her career.

While Kyle attended Villanova, Ayahna did her thing at St. Joseph’ –where she majored in criminal justice on a full athletic scholarship.In 2005-06, Ayahna was named an Atlantic 10 All-Conference Second-Team selection, averaging 12.1 points and 1.5 steals per game; once again leading the team in scoring.

However, a torn ACL made her missed the final nine games of her junior season.

Ayahna Cornish-Lowry has definitely left all the playing to her man, and instead focuses on using basketball to help others. In 2013, the long-time couple founded the Lowry Love Foundation –which “aims to touch the lives of the underprivileged and disadvantaged in order to promote their attainment of a better quality of life.”

She is also the proud mother of the couple’s two sons. Ayahna Cornish-Lowry and her hubby welcomed first son Karter in 2011.