Kristin Pelinka is the lovely wife of NBA executive, Rob Pelinka -who currently serves as General Manager for the Los Angeles Lakers.

Kristin’s husband was born Robert Todd Pelinka Jr. on December 23, 1969; the Chicago, Illinois native was a star basketball player Lake Forest High School in Illinois before attending the University of Michigan, where he was a member of the famous “Fav Five” teams.

He sought out to get a degree in business at Michigan’s School of Business Administration. After graduating from Michigan, he graduated from the university’s law school.

After college, Rob embarked in a highly successful NBA agent career, representing big name players like Kobe Bryant, Kevin Durant and Andre Drummond through his Landmark Sports Agency. In 2017, he was named the Lakers GM.

He’s been happily married to the beautiful Kristin Pelinka for yeas now. 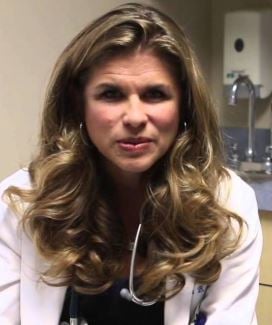 Kristin Pelink was born Kristin Brett Schwarz, on September 22, 1976; the California native comes from a medical background; her father Kenneth is a dentist.

Kristin Pelinka is also in the medical field herself. She is a licensed pediatrician, she graduated from Duke University and then UCLA’s School of Medicine. According to her bio, she completed her residency at Cedars Sinai Medical Center in Los Angeles. She began practicing pediatrics in 2006.

The blonde is also the mother of the couple’s two adorable young children, son Durham and daughter, Emery Pelinka. The wife and mother of two is currently listed as a pediatrician in Costa Mesa, Cali; she previously worked for Pacific Ocean Pediatrics, Kiddox Medical Group and Coastal Kids.

Kristin isn’t active on social media, that’s most likely because she keeps busy caring for the couple’s children. The family of four resides in Newport Beach, California.