Her oldest son, Jaxson, who grew from his mom’s size (5-foot-11) to a 6-11 senior, was arguably the most sought-after basketball player locally of the early signees.
Jaxson previously played college ball for Moeller High School. Since arriving at the University of Texas, the power/forward has earned a number of accolades including Second-team All-Big 12, Big 12 Freshman of the Year and Big 12 All-Defensive Team.

Kristy and her husband Bengals assistant coach Jonathan Hayes, are also the proud parents of daughter Jillian who is also an outsatding basketball player. Jillian Hayes is a top scorer of the Loveland girls team. Kristi is also the mother to younger sons Jewett and Jonah. 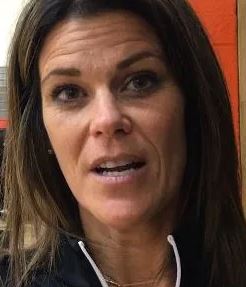 But is no coincidence that two of her children have sports running through their veins. Kristi Hayes, was a basketball star at Drake University and their dad, Jonathan, played 12 seasons in the NFL as a tight end for the Kansas City Chiefs and Pittsburgh Steelers.

Krist was born Kristi Kinne, she is an Iowa native and was a starter for her Jefferson-Scranton High School team. She scored 3,406 points during her Iowa prep career, including averaging 52 per game as a senior.

While attending Drake University, Kristi Hayes was Freshman of the Year, then MVP of the conference as a senior when they made the NCAA tournament.
Kristi holds a master’s degree from Southern Illinois in sports administration and coached as a graduate assistant for the women’s basketball team at Southern Illinois-Carbondale. From there, she moved closer to home to Iowa to coach. It was there she met Jonathan Hayes.
Before starting a family, Kristi served as an assistant women’s basketball coach at Oklahoma and Iowa. Following her marriage she worked as assistant Norman High School girls’ basketball coach.

Kristi who gave up her college basketball coaching career to become a mother, is also an ovarian cancer survivor.