Kelli Hayes is a former college basketball player who is apparently in a relationship with NBA player, Jabari Bird.

Kelli’s NBA stud is said to have been arrested for reportedly assaulting, strangling and kidnapping someone. Though his victim is yet to be identified it was reported earlier this year he and Kelli Hayes were in a romantic relationship.

Jabari is currently a “two-way” player for the Celtics, meaning he divides his time between the pros and the Celtics “G-League” team, the Maine Red Claws. Bird was born July 13, 1994; the California native played his high school basketball at Salesian High School and played college basketball for University of California, Berkeley.

Bird, a second-round draft choice of the Celtics in 2017, signed a two-year contract with the team this summer after splitting his rookie season between Boston and the Maine Red Claws of the G League. He made his professional debut against the Philadelphia 76ers in October 2017. 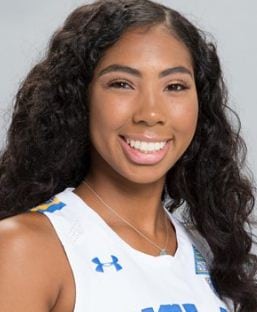 As for his special lady, Kelli Hayes –she is no stranger to the game. Hayes graduated this June from UCLA –where she started in all 35 for the Bruins in 2017-2018 and played 23.5 minutes per game. She averaged 6.2 points and 2.2 rebounds per game while shooting 37.5 percent from the field.

Kelli who is half-Filipino, began dating Bird back in 2016. It is unclear whether the couple is still together. Neither of them have photos of each other on social media.

According to recent reports, Jabari “is being guarded by the Boston Police at a local hospital for an evaluation after a domestic violence incident.” The victim was taken to a separate hospital for treatment of injuries.