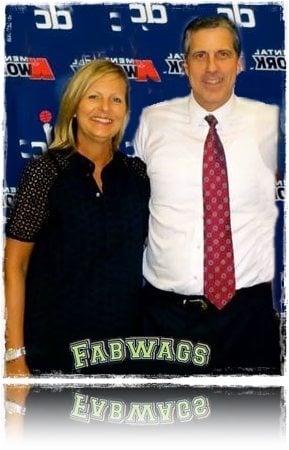 Behind a great man is a Fab NBA Wag, because we are going to dig into the live of Washington Wizards’ head coach Ryan Wittman, his children and especially we will be talking about his kind, brave, smart beautiful and charismatic wife Mrs. Kathy Wittman.

54-year-old Randy Scott Wittman a former 6’6” shooting guard with the Indiana Hoosiers, who played for 9 amazing years at the NBA, he was selected during the 1983 NBA Draft by the Washington Wizards, the Washington Bullets at that time.

Wittman didn’t make  his debut with the Wizards, but with the Atlanta Hawks after his rights were traded;  in 1988 he was trade for Reggie Theus to the Sacramento Kings. In 1992 Wittman playing for the Indiana Pacers announced his retirement, his  averaged 7.4 points, 1.1 rebounds and 2.2 assists per game.

In 2010 Ryan flew to Italy where he joined the Forli based team Fulgor Libertas Forli, in 2011 came back to the U.S where he joined the Mad Ants at Fort Wayne, Indiana, During the the 2011 season he played for the Polish team the  Zastal Zielona Góra. Ryan is currently a graduate manager at Boston College, and is studying to earn his graduate degree from the Carroll School of Management.

Mrs. Wittman is also the proud momma of her beautiful daughter Lauren Wittman, who graduated in 2009 from Eden Prairie High School and graduated last year with a Bachelor’s degree, Tourism Management from Indiana University. Lauren worked at St. Paul  Saints, was a full-time intern at the Athletic Depart of Indiana University and currently is a banquet manager at White Lodging Services in Kentucky.