Karizma Ramirez has been revealed as the woman who was seen out an about on the streets with NBA player, Tristan Thompson.

Karizma and the NBA forward have been spotted a couple of times, first on February 27, the two shared dinner at New York’s Carbone. Most recently they met up at Nobu on March 5th.

Though reports say they are not dating, two dates can only mean for serial cheater Tristan she’s definitely potential new boo material. 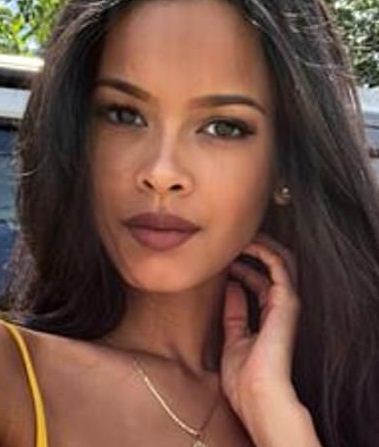 He previously played one year of college basketball for Texas before declaring for the 2011 NBA Draft. Tristan was selected 4th overall by the Cleveland Cavaliers in 2011 and he helped the team win the NBA Championship in 2016.

Thompson is the father of Khloe Kardashian’s baby girl True –born in 2018, the couple began dating in 2016. He is also the father of son, Prince with ex-girlfriend and model Jordan Craig.

It appears Tristan has moved on to a new romantic quest, after cheating on most recent baby mama Khloe with family friend, Jordyn Woods. The woman in question is Karizma Ramirez. Reports say the two met through mutual friends.

Karizma Ramirez was born September 11, 1990. The California native began modeling not too long ago as she is also described as a former waitress.

In the past, the brunette stunner was linked to Chris Brown and Brooklyn Nets player, Shane Larkin. Is safe to say she has a few connections, back in 2013 she was also spotted hanging out with Karrueche Tran.

According to the Daily Mail, Ramirez dated Brown for a few months while he was still dating Rihanna. At the time she worked waiting tables at Finale in New York.

Tristan denies dating Ramirez, who he met thanks to his teammate Jordan Clarkson.

With all the media attention, is not unusual her Instagram is set to private.