Tammy Sloan is the loving wife of NBA coach, Jerry Sloan best known for his tenure with the Utah Jazz.

Tammy’s husband began had a successful career in the NBA, first as a player, and later as a coach, spending the majority of it with the Utah Jazz. Numerous reports have confirmed Jerry’s passing today at age 78.

Her husband was born Gerald Eugene Sloan on March 28, 1942. The Illinois native is said to have died from complications from Parkinson’s disease and Lewy body dementia, he had been diagnosed in 2016.
Jerry spent 10 years in the NBA playing for the Baltimore Bullets and the Chicago Bulls. He was a two-time All-Star and was four times named to the NBA All-Defensive First Team. He still ranks in the top five in Bulls franchise history in points, rebounds, games and minutes. However his career was cut short after a decade by a number of injuries.

According to ESPN, Sloan then returned to basketball as a scout for the Bulls and was named an assistant with the team in 1978. He took over as head coach the following season. He then served as a Jazz assistant from 1985 to 1989 before taking over as head coach and going on a legendary run. The Jazz registered 16 straight winning seasons and 15 consecutive playoff appearances. He finished his coaching career with 1,221 regular-season victories. He was inducted into the Hall of Fame in 2009 after a 26-year coaching career. He returned to the Jazz in 2013 as an adviser and scouting consultant. 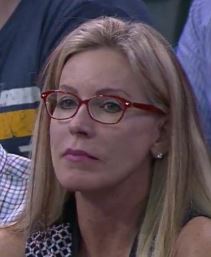 In his lifetime, Jerry was married twice; first wife was high school sweetheart Bobbye Sloan -with whom he fathered three children, Brian, Holly and Kathy. Bobbye Sloan died in 2004 of cancer, the couple was married for 41 years.

In 2006, he and second wife Tammy tied the knot. The two had met in 2005 at a local restaurant and they hit it off.
Tammy Sloan was formerly known as Tammy Jessop, like Jerry she was previously married to a man named, Merril Jessop and had one son, Rhett Jessop -from her previous relationship.

According to an article, the former coach’s wife, was born in Ohio as Tammy Lauritzen Barlow. The lovely blonde made the move to Herriman, Utah in the 80’s -where she made a career in the restaurant business. During their marriage, Tammy, often described as businesswoman, remained very private and appeared in events next to her husband supporting him throughout his career.

According to her LinkedIn, she is a sales executive who served as VP of sales at Sysco Foods from 1992 until 2008. She was a US Welcome Pavilion Board Member until 2016. She was also a board member of the Cystic Fibrosis Foundation.