Giselle Ramirez is the stunning girlfriend of NBA player JaValee McGee, her man is currently a center playing for the Golden State Warriors.

**** Giselle Ramirez and McGee make for one of the game’s hottest couple and even though she is yet to reach wife title, the birth of the couple’s first child last year, pretty much sealed the deal between them. Though we probably wouldn’t know who Giselle Ramirez is if it wasn’t for her relationship to the NBA star, Ramirez is pretty much an independent woman who has done very well for herself.

Get to know her better with a list of her top facts below. 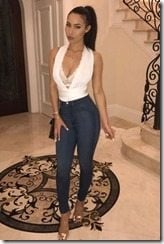 Thouhg she grew up in Los Angeles, Ramirez is a proud Latina hailing from El Salvador. According to social media she is fluent in Spanish.

2. She worked as a model in the past.

3. The brunette is a real estate agent

Ramirez is currently a REALTOR®/Real Estate Agent at Rodeo Realty. She specializes in properties throughout the Los Angeles County.

4. She met McGee thanks to her job in real estate.

It was precisely through her job that she and Javale met. According the L.A Times, Javalee boughtMarc Anthony’s home in Encino for $2.425 million. It was Giselle Ramirez who represented the buyer in the sale.

5. She is a college graduate.

6. She previously worked in sales.

Ramirez had a job in Sales and Operations while managing a Media company in the entertainment industry.

7. She is the mother of one daughter.

Giselle Ramirez and JaVale have been together since at least 2015. The two welcomed an adorable baby girl born in 2016. They named their daughter Genevieve Grey McGee.