Hazel Renee is the proud girlfriend of NBA star, Draymond Green –currently a player with the Golden State Warriors.

Hazel’s NBA beau was drafted 35th overall by the Golden State Warriors in 2012 and has remained with the team since. He helped the Warriors win NBA Championships in 2015 and 2017. He was named to his first All-Star game in 2016 and in 2017, he was named NBA Defensive Player of the Year.

The Saginaw, Michigan native was a two-time state champion at Saginaw High School in Michigan. Born March 4, 1990; the son of Mary Babers and Wallace Davis; went onto play at Michigan State University –where he was named Big Ten Player of the Year during his senior season.

The 28-year-old has been dating the pretty Hazel Renee for a while; he was previously in a relationship with Jelissa Hardy, the mother of his son Draymond Jr. The couple were together for years and he even treated her daughter as his own.

New chick, Hazel happens to be an actress, recording artist and TV personality who has a decent following on social media. You may know Renee from her appearance on Basketball Wives or perhaps from her recurring role on Fox’s Empire. 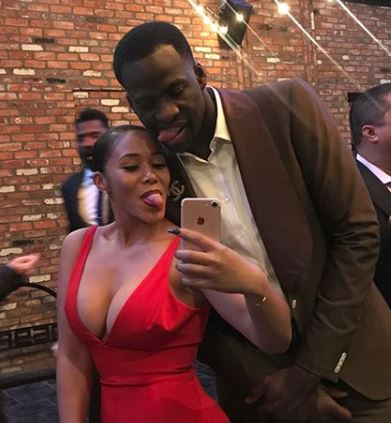 She and Green were first linked together last October, since then, they’ve confirmed the relationship sharing multiple social media snaps. Hazel Renee was also said to be the cause, Green left his family.

Hazel Renee was born March 31, 1986; according to BravoTV Hazel won the National American Miss Teen Michigan title as a teenager. She later went on to model in Smooth Girl and was featured in Smooth Magazine’s Top 100 Issue.

The Kansas native is pursuing a career in music and acting. She first appeared on Empire on the show’s third season in 2017. She also appeared on season 9 of The Real Housewives of Atlanta as the musician friend of Kandi Burruss.

Prior to launching her career in entertainment by appearing on MTV’s Making The Band 3, she ran her own concierge company. She had previously worked as a celebrity assistant. The 32-year-old is also the proud mother to daughter, Olive Jay.