Kim Van Deraa is the living partner of NBA player turned coach, George Karl. Her 65-year-old husband served as an NBA coach for over 20-years. Keep reading to know more about him and the lovely Cathy Cramer.

Kim’s boyfriend was born George Matthew Karl on May 12, 1951. The Penn Hills. Pennsylvania native is one of just a few coaches to have won 1000 NBA games. That’s why when Karl says something as serious as ‘the league as PED problems’ you listen.

As a player, Karl averaged 6.5 ppg and 3.0 apg over 264 games and five seasons between the ABA and NBA. He attended the University of North Carolina. Although drafted by the New York Knicks in the fourth round of the 1973 NBA Draft, he signed with the San Antonio Spurs of the ABA.

In 2001, Karl was selected as the head coach of USA Basketball’s 2002 World Championship Team that competed in the 2002 FIBA World Basketball Championships in Indianapolis.

He last coached in the NBA last year when he was head coach of the Sacramento Kings. He was fired after a disappointing season where the team went 33-49.

He has compiled more than 1,155 victories, made 22 playoff appearances and put together 21 winning seasons.According to one of his many bios, he ranks fifth in NBA history with 1,156 career victories.

It looks like Karl’s upcoming book will give much to talk about. In the meantime let us tell you about, Kim Van Deraa. 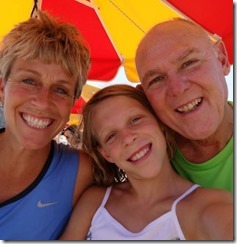 Karl has been in a relationship with Van Deraa for some time. Before her, Karl was a married man.

He and ex-wife, Cathy Cramer –an Idaho native, had two children, daughter Kelci and son Coby, who was on Denver’s roster at the end of the 2009-10 season.

Coby and George became just the third father/son duo to face each other in an NBA game and the first to do so in a postseason game.

Cathy and Karl have been separated for years. The couple got a divorce in 1998 after Karl had been named the Bucks head coach.

He is in a relationship with life partner Kim Van Deraa –with whom he launched the George Karl Foundation in March 2012.

Kim Van Deraa and George have some ties, the Appleton, Wis.,native played high school basketball. Kim later attended University of Wisconsin, where she was an outstanding player. Accoridng to her LinkedIn, she holds a master in Sports and Fitness Administration.

The two met while Kim worked a secretary with the Milwaukee Bucks. Kim is also the mother of the couple’s daughter, Kaci.

You can check Kim Van Deraa on Facebook here.