Erin Popovich is the wife of American basketball coach Gregg Popovich. The couple has been married for almost 40 years. They are the parents of Micky and Jill Popovich.

Gregg Popovich, often referred to as “Coach Pop” or simply “Pop”, is known for being the head coach of the San Antonio Spurs who lead the team to five NBA championships from 1999 to 2014. He took over as coach of the Spurs in 1996, and has been the longest tenured active coach in both the NBA and all US major sports leagues.

The Serbian coach worked as an assistant on the Air Force Academy from 1973 to 1979. Some people say that, during this time, Gregg met Mrs. Popovich, the daughter of Air Force Academy athletic trainer Jim Conboy. Some others say Mr. and Mrs. Popovich’s relationship goes way back into Gregg’s college years, when he moved his family into the dorm for one year while he majored in Soviet studies at the Air Force Academy. He also worked as an assistant coach at Pomona-Pitzer College, a Division III school in Claremont, California.

Erin is an Air Force brat. She graduated from Colorado State University. Her education has been strict, which helps Gregg in his games, as she’s always there to give him advice. Other coaches that would scream and yell receive a “Do you like to look like that?” from Erin, and Coach Pop says that this helps him in keeping his on-court antics to rein. Let’s keep learning about Mrs. Popovich in the facts below: 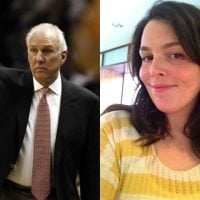