Dana Brooke is apparently romantically linked to NBA player, Enes Kanter –who recently got ejected from a game.

Dana’s 6 ft 11 in stud is a player with the New York Nicks. Enes who plays center, was selected third overall by the Utah Jazz in 2011. He became the team’s starting center in 2013, then a 2015 trade sent him to the Oklahoma City Thunder for two years. In 2017, he joined the New York Knicks.

Born to Turkish parents Mehmet and Gulsum Kanter -while his father studied in Switzerland on May 20, 1992. His younger brother Kerem is also a basketball player. 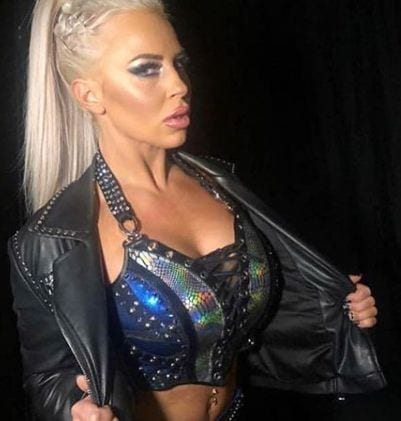 Enes however, can surely count with the support of his lovely lady, Dana Brooke –real name Ashley Mae Sebera –a professional wrestler, body builder and fitness competitor. The two were first linked together over the summer.

The blonde born November 29, 1988 in Ohio, is best known for her ring name Dane Brooke as she performs on the Raw brand.

She practiced gymnastics for 18 years and also had a short stint as a diver.

Dana Brooke joined NXT in 2013 from the world of fitness competitions. She made her television debut in an episode of NXT in April 2015.

In addition to her in-ring training, she competed as a bodybuilder and held several National Physique Committee titles. She earned her way into the Fitness International competition at the 2015 Arnold Sports Festival, a first for an NXT or WWE Superstar.

Prior to Enes, she was in a relationship with Dallas McCarver –a fellow bodybuilder who died in 2017.

Check out Dana Brooke on Instagram here. And don’t Miss her 5 Facts on FabWags here.