Alaina Anderson is the seriously **** chick dating NBA player, Derrick Rose. We are used to her man making all the headlines but in this occasion we want to tell you all about the hot, Alaina Anderson.

According to her social media networks, she hails from Chicago and until recently, was a college student.

The **** blonde and Rose have been dating for a number of months and seem to have a few things in common. Like her man, she was also born and raised in Chicago and also graduated from the University of Memphis.

Alaina set the record straight for the haters when she posted on Instagram she was ‘mixed’ ‘with black and white.’ Miss Anderson actually belongs to the Memphis University -Black Student Association. 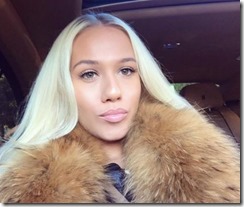 She went on to say

“I don’t care if I’m considered ‘too dark’ or ‘too light’. Or if my features are more ‘black’ than ‘white’ or vice versa. Who cares what my hair texture is. No, I wouldn’t rather be one race over the other. I don’t care about the ‘2% law’ or what your great-great-great grandmother would say if she saw me. I check both African American & Caucasian on the little surveys. If I can only choose one, I pick other. If there’s a blank to ‘explain’ I write polka dot. “shrugs’ I will equally stand up for black rights, as I would white rights, brown rights, purple rights, stripe rights. I proudly claim both sides EQUALLY. To ask me to choose or to tell me I am only one race is disrespectful. I IS WHAT I IS & that’s biracial. No ifs, ands or buts about it. Ya digg?

According to a past article Rose allegedly didn’t want people to know he was dating a ‘white chick’ but let’s be real, what guy in his right mind wouldn’t want to be dating gorgeous Alaina?! 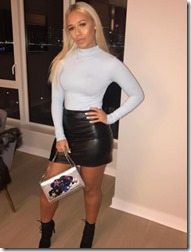 Furthermore, Derrick was proud to show off his girlfriend after he was involved in a legal dispute with an ex-girlfriend who accused him of gang raping her. Long story short, Rose was found not guilty and Alaina Anderson was there to cheer him on and share the joyous news.

One thing is for sure, Alaina is super close to her family specially to her grandmother –which says a lot about her. She is very active on Instgram where she has become a bit of a social media model. She often shares images of her while wearing fancy clothes and has over 80K followers.

You can also check her out on Twitter here.