Kiara Morrison is the lovely girlfriend of NBA star, DeMar DeRozan. Her 27-year-old beau is a 7th year guard for the Toronto Raptors. Keep reading to know Kiara Morrison’s biography.

Kiara Morrison’s boyfriend was born DeMar Darnell DeRozan on August 7, 1989. The Compton, California native was born to parents Frank and Diane. He has a brother named Jermaine.

He chose USC over Arizona State and North Carolina. DeMar became a Pac-10 All-Freshman stand out for the USC Trojans.

Following his Freshman season at USC, DeMar entered the 2009 NBA Draft. He was the 9th overall selected by the Toronto Raptors. He was selected to participate in the 2011 NBA All-Star Rookie Challenge and was selected as a member of the 2012 USA Basketball Select Team. DeMar also participated in the 2010 and 2011 NBA Slam Dunk Contests, where he finished 2nd and 3rd respectively. 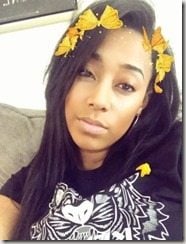 The couple has been together for a few years. Morrison is a USC graduate. The two met while attending USC.

Morrison is half Filipina and half black.

Kiara Morrison isn’t only his girlfriend, the pretty wag is also his baby mama. Together they are the proud parents of two adorable girls. Kiara and DeMar welcomed their first daughter, Diar in 2013. The couple became second time parents to second daughter, Mari in 2016.

Kiara and her small family have become very familiar with the Toronto community. She is often in the stands throughout games cheering for her man.

Morrison makes for a perfect wag; really understands her man, after all, she used to be a basketball standout in her own right.

She attended Serra high school –where she played small forward; averaged 7.9 points and eight rebounds a game, as a senior. While at USC, she served as the women’s team manager.

Like most wags, she dedicates a lot of her time into giving back. Kiara and DeMar launched a literacy program in 2014, the DeMar DeRozan All Star Book program, to help donate books to classes in ten different schools across low income areas across Toronto.

Kiara and DeMar are currently engaged.