Ellen Morey is the lovely wife of Daryl Morey -whom you may know best as the General Manager of the Houston Rockets.

Elle’s husband made headlines following a controversial tweet, the 47-year-old received fierce criticism from Chinese fans, sponsors and commercial partners -after tweeting “Fight For Freedom. Stand With Hong Kong.” Morey has since apologized.

Born September 14, 1972; the Baraboo, Wisconsin native is also the co-founder of SSAC. During his time with the Rockets the team has had the 2nd best record in the NBA & has never had a losing season.
He holds a BS from Northwestern University and an MBA from the MIT Sloan School of Management.

Morey joined Houston after serving three years as SVP for the Boston Celtics. In 2010, he was named to the Forty Under 40 list by SportsBusiness Journal. He was the Yahoo.com Executive of the Year for 2008-2009. He was named “Top 50 Most Inﬂuential People in Basketball” by HOOPSWORLD.
The sports exec, has been happily married to wife, Ellen Morey. 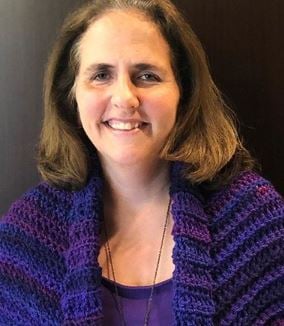 Mrs. Morey and her husband have been married for over two decades. Together they have two children, a son, Scott and a daughter, Karen. Scott Morey is a student at Kinkaid High School -where he plays varsity soccer. He is due to graduate in 2020.
The couple’s daughter, Karen Morey is a student at NYU and a is pursuing a career in film making. According to her own blog, Karen is a ‘passionate storyteller who has been making films from an early age’

Ellen Morey or Houston Rockets first lady if you will, is well known for her handy craft hobby. The mom of two is a fantastic knitter and has even been featured on local news about it. Ellen Morey knitted a James Harden doll and – told news staffers that she was on a mission to knit the entire team. She has since gone onto knit such as Property Brothers. Ellen has also moved on to knitting other items such as shrugs and blankets.