Mia Burks is the name you’ll be hearing a lot in the following days and for years to come. She has been revealed as the new woman in the life of Nicks baller, Carmelo Anthony.

Anthony 32, stunned last week announcing his once rock solid marriage to La La had come to an end. The two first got together in 2004 and were married in the summer of 2010.

Everyone began with their own theories but it was clear there had to be something powerful to split them up.

It was soon revealed Carmelo knocked someone up and that award goes to our girl in question, Mia Burks. Her identity was first made public by Fameolous.

Keep reading to get to know her better. 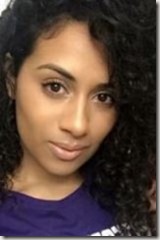 Accoridng to gossip site, Fameolous Burks will give birth to a baby girl this upcoming July.

Though reports from TMZ said Carmelo’s baby mama was a stripper he met at a gentleman’s club in NYC –Burks is actually a social worker.

3. She met Carmelo at a club in Chicago.

Chicago socialite, Anthony Jacobs, told WGCI-FM in Chicago, “Mia met Carmelo at Room Seven, a club in Chicago, when he was here for the NBA draft doing press.” Jacobs also confirmed that Mia is not a stripper.

4. She is a University graduate.

According to her LinkedIn, Mia earned a Master’s degree in Health Communications from Northwestern University in 2016. Prior to studying at Northwestern, Mia received a Bachelor of Applied Science in Biology and Public Health at Saint Augustine’s University in Raleigh, North Carolina.

5. She has a legitimate job.

6. She knows other famous people.

Mia has been pictured out on the town with Black Ink Chicago stars Ashley Pickens and Briea Chanel.

7. She was allegedly in a previous relationship at the time she began seeing Carmelo.

From her social media it was found that she hanged out with Black Ink Chicago star Ryan Henry. Fameolous also added Mia and Henry were in a brief relationship.