Candice Patton is the stunning actress, best known for her role on the TV series, The Flash -and now also for hooking up with J. R. Smith.

Candice’s and her alleged relationship with J.R. Smith was revealed by non other than Smith’s wife, Jewel Harris Smith -who took to Instagram to reveal the affair saying it was God’s will she went public.
Smith was quick to respond and though he didn’t confirmed the relationship he didn’t deny it either. Instead the former Cavaliers revealed he and wife Jewel have been separated for months.

34-year-old J.R. Smith who last played with the Cleveland Cavaliers and was once described as one of the NBA’s best shooting guards -tied the knot to Jewel in 2016. Together they have 3 children together; Demi, Peyton and Dakota. Smith is currently an NBA free agent.
Candice Kristina Patton was born on June 24, 1988, in Jackson, Mississippi, but spent her formative years in Plano, Texas.
She attended college at Southern Methodist University -where she appeared on stage in the school’s theatre production of Shakespeare’s “Titus Andronicus.” 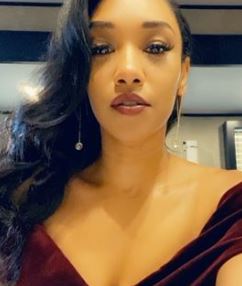 Patton began her career after landing a role on the soap, The Young and the Restless, where she played Robin from 2004 to 2005. She later had a three-episode arc on HBO’s Entourage.
She then guest-starred as Tori on BET’s popular series, The Game. However, she was catapulted fame playing Iris West on Supergirl, DC’s Legends of Tomorrow, and Arrow.
Her other TV credits include appearances on Grey’s Anatomy, One Tree Hill, and CSI: Miami.
As for her private life, since entering Hollywood the 31-year-old hasn’t been romantically linked to anybody, so shes presumed single. Patton is also a proud dog owner and her adorable dog, Zoe, has her own Instagram account.