Brynn Cameron is the former fiancée and baby mama of NBA star, Blake Griffin –with whom he shares two children.

Brynn Cameron is accusing her ex- of abandoning his family which includes her and their children for a life of luxury next to supermodel and reality TV star, Kendall Jenner.

Brynn’s ex was selected 1st overall in the 2009 NBA Draft out of the University of Oklahoma and won the league’s Rookie of the Year Award in 2011 while playing for the Los Angeles Clippers. Griffin joined the Pistons in January 2018 in a contract that’s expected to net him $170 over the next five-years.

Cameron and Griffin welcomed two children together, Ford, 4, and Finley, 1.

Miss Cameron is originally from Newbury Park, Los Angeles. She has a brother named Jordan Cameron who played in the NFL. 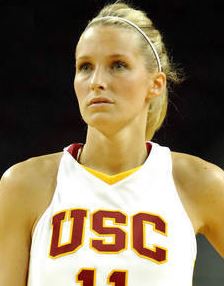 Brynn Cameron and Griffin seamed to share a lot in common, the blonde is a former women’s NCAA basketball player for USC. She threw some hoops at the University of Southern California, graduating with the class of 2009 with a degree in sociology.

According to her bio on the University of California website, she emerged as the top scorer with 9.8 points per game –during her freshman season. She also ranked number 25 in the nation in three-point field goal percentage.

Brynn was also in a relationship with another professional athlete. In fact from her relationship to quarterback Matt Leinart she became the mother of her first child, Cole Cameron Leinart –born in 2006. Brynn Cameron and Matt Leinart met while attending USC.

The mom of three went on to describe Griffin as a ‘womanizer’ in a suit obtained by TMZ. She also reveals Griffin broke up their engagement to be with Jenner –despite the fact they not only share two young children but also claiming that she dropped career obligations and even served as his therapist at some point in his career.