Cookie Johnson, real name Earletha Kelly has been married to NBA legend Magic Johnson, for decades and together they share two children.

Cookie has been a supportive and loyal NBA Wag since tying the knot to Earvin “Magic” Johnson Jr. –in 1991. She stood by his side despite her hubby’s HIV revelation just days after their nuptials.

Her husband’s career has been widely covered over the years, born August 14, 1959; the Michigan native spent his entire 13-year career with the Los Angeles Lakers. He was named to 12 NBA All-Star games and led the league in assists four times. His performance in the 1992 All-Star game earned him the game’s MVP Award.

He is equally known for his HIV activism. However, there’s no way he couldn’t have done it without the love and support of Cookie Johnson. She is the real brave one in our eyes. 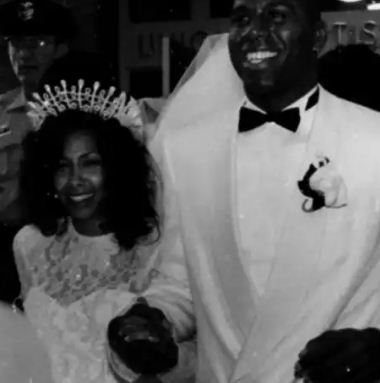 The Alabama native was born Earletha on January 20, 1959 –was nicknamed Cookie by her mother who chose the name based on the character from the show 77 Sunset Strip.

Cookie met her future husband while attending Michigan State University –where he was already a basketball star on campus. She was pursuing a career in the fashion industry.

The college sweethearts wedded on September 14, 1991 –roughly two months before he made the HIV announcement. At the time it was also clarified that she and their unborn child did not contracted the disease.

She and Magic have a son named Earvin III who goes by E.J., and is gay. They adopted daughter, Elisa in 1995. She is also the stepmom to Andre Johnson –born from her husband’s previous relationship to Melissa Mitchell.

Both E.J. and Elisa appeared on E!’s reality T.V. series, Rich Kids of Beverly Hills and on EJNYC.

60-year-old Cookie describes herself as a philanthropist and entrepreneur. She developed a line of jeans called CJ by Cookie Johnson which stayed in business for several years. She is also the author of the NY Times bestseller “Believing in Magic”

For the couple’s 25th wedding anniversary, the retired NBA legend-turned-businessman surprised Cookie with a lavish yacht party in Monaco.