Yeli Ramos is the gorgeous wife of MLB player, Wilson Ramos –the newest addition of the New York Mets.

Yeli’s husband was born Wilson Abraham Ramos Campos on August 10, 1987 in Valencia, Venezuela. He was signed as a free agent by the Minnesota Twins in 2004. He was named as the catcher Baseball America’s All-Rookie Team.

The Major league catcher from Venezuela began playing for the Washington Nationals in 2010. In addition, he also previously played for the Tampa Bay Rays and the Philadelphia Phillies.

His new contract with the Mets is reportedly worth $19.5 million over two years. Meet his hot wife below. 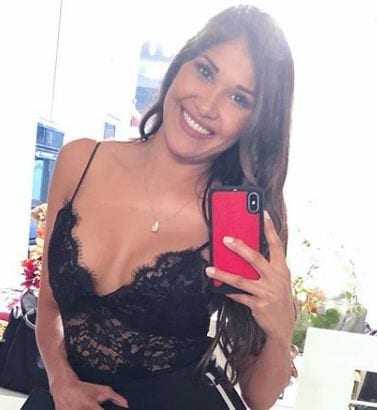 #1 She is his wife of four years

Wilson and Yeli Ramos have been married since 2014. Is not clear how the couple met or how long they dated prior to their marriage.

Yeli Ramos is a proud MLB wag and the mother of two small children, a daughter Antonella –born in 2014; and a son, Wilson Abdiel –born in 2017.

#3 She is active on social media

Yeli, can also be found on social media as Yely Escalona de Ramos. The Venezuelan stunner keeps busy as a stay at home mother and supportive spouse. She has gained over 11K followers on Instagram –most likely due to her hubby’s fame.

During the 2016 season Ramos tore an ACL and meniscus during a home-plate collision.

#5 Her man is a kidnapping survivor

The 2x All-Star and silver slugger winner is also known for being a kidnapping survivor. Back in 2011, Ramos was held captive for two days –after four man took him to a secluded cabin in the mountains of Venezuela. He was rescued during an operative where gunfire erupted led by the National Guard. It was later discovered that a cousin of him had been involved in the kidnapping.