You are here: Home / MLB / Who is Tyler Glasnow’s Girlfriend?

Tyler Glasnow -whom you probably recognize as an MLB player currently playing with the Tampa Bay Rays, is single?

Tyler who previously played in MLB for the Pittsburgh Pirates, will be starting in game two of the world series for the Tampa Bay Rays.

The 27-year-old right-hander, was 5-1 with a 4.08 ERA in 11 starts during the regular season and 2-1 with a 4.66 ERA in four postseason starts. His fastball averaged nearly 98 mph this season. But you probably knew all that, so what’s the deal with his private life?

The professional baseball pitcher was born Tyler Allen Glasnow on August 23, 1993; the California native had committed to play college baseball at the University of Portland but instead, signed with the Pittsburgh Pirates after he was selected in the 2011 MLB draft.

Glanow aka Mini Horse, is fairly quiet when it comes to his personal/romantic life. He seems pretty mindful about his privacy and unlike other famous players he isn’t much of a sharer. In fact, he isn’t active on social media so is really hard to tell if he is currently seeing anybody. Having said that, with professional athletes is always hard to tell, they may or may not be seeing anyone and just don’t want to tell the world about it. 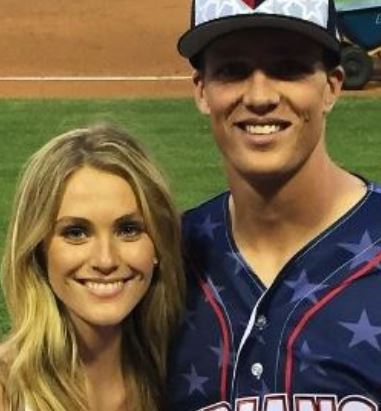 Tyler was previously linked to gorgeous model, Brooke Register. To be honest, we’re not 100% sure if they are still together. If you have any news, please drop a comment in the section below.

Looking for more Love, Lives and even Scandal of Major LEague Baseball’s Hottest Wives and Girlfriends? We’ve got you covered with the juicy gossip in our popular Roundup here