You are here: Home / MLB / Who is Ramon Laureano’s Girlfriend?

Ramon Laureano, the MLB player you know as a professional outfielder for the Oakland Athletics -may be a single man.

Ramon was born July 15, 1994; in Santo Domingo, Dominican Republic -to parents Nina and Ramón Sr. as their only child.
He was drafted out of Northeast Oklahoma A&M in the 16th round of the MLB draft by the Houston Astros in 2014, and was traded to the A’s in 2017. He made his A’s big league debut on Aug. 3, 2018, against Detroit.

You probably already know the A’s centerfielder, can catch, can throw and he can hit and do all of the typical baseball stuff, but what about his personal side.

Laureano made a comment about having a girlfriend back in 2018, during his MLB debut however is not clear if the two are still together. Though it may appear as if he is single, is hard to tell since the 26-year-old keeps super private about his love life.

Let’s review some facts that make him quite the catch! 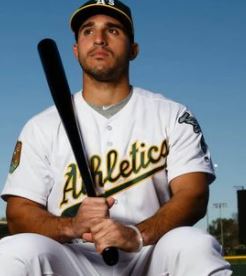 1. He knows to defend his loved ones

Earlier this year, Laureano got into a shouting match with Astros hitting coach Alex Cintrón. Laureano told ESPN in an article posted Monday afternoon that Cintrón, “said in Spanish something you don’t say about my mother.”
“So for (Cintrón) to say that to me about my mom, it doesn’t sit well. I’ve got a fire inside me right away in that second.”

2. His teammates have his back

In the midst of a suspension for the incident between Laureano and Cintron; A’s starter Frankie Montas said of Laureano. “If we lose him, it’s going to be tough.” “He’s one of the guys that we need”

3. He has a cool nickname

Laureano is properly nicknamed “Laser” for the way he’s able to dart a ball from the deepest point of center field to anywhere there was a runner attempting to get an extra bag.

4. He’s into other sports

During quarantine, Laureano picked up golf and really wanted to perfect his craft at playing the video game MLB: The Show. He was playing the game a lot during quarantine to pass the time and had a group of eight or so guys get together and play. It sounds like it got quite competitive as well.

5. He is known for his work ethic

During an interview, long-time friend of Laureano, Ricky Rivera, who played with him at Northeast Oklahoma A&M, said even though they were on the same team, Laureano would arrive at practice hours earlier. He was probably also the last one to leave.

Sadly, Ramon Laureano doesn’t seem too big of a fan of social media.