You are here: Home / MLB / Tim Lincecum’s List of Girlfriends

Tim Lincecum –whom we also know as The Freak, is hoping to make a comeback. The 33-year-old MLB star is said to be ready to play again.

According to reports he re-appeared on social media looking jacked, which sparked rumors that he may be ready for a comeback.

Born June 15, 1984 to Chris and Rebecca Lincecum, the Washington native won the Golden Spikes award as a senior at the University of Washington.

The San Francisco Giants selected him in the first round with the tenth pick in 2006. He pitched for the Giants from 2007 to 2015 and for the Los Angeles Angels of Anaheim in 2016 –before becoming a free agent. 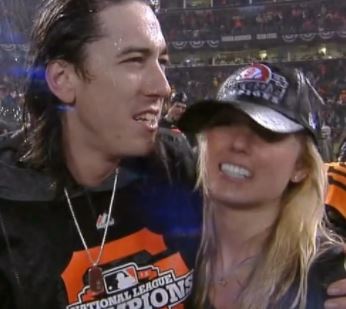 Tim has been mostly known for his talent on the field and not really for leading the life of a ladies man/ big time sports athlete –which he could. However, instead of playing the star athlete card with the ladies he is actually a very private fella.

In fact, he’s been very tight lip when it comes to his love life. He’s been in a couple off relationships however Big Time Timmy Jim, has abstained from taking his relationships to the next level.

He was pictured celebrating back in 2012 next to a stunning blonde. The blonde was identified by sports sites as ‘Ruth’ and she is described as his longtime girlfriend. It appear this girl Ruth kept him from dating others from 2010 until around 2014. Since then, he is believed to be single.