Stacey deGrom is the lovely MLB wag married to Mets’ ace, Jacob deGrom. The couple has been married for a few years now, meet her below.

Stacey’s MLB stud was named 2014 NL Rookie of the year –following a stellar first season with the New York Mets. In 2015, he helped the Mets reach the World Series.

Born June 19, 1988; he played baseball and basketball at Calvary Christian Academy in Ormond Beach, Florida. He played college baseball at Stetson University. He was selected by the Mets in the 2010 draft.

deGrom is lucky enough to count with his wife, who’s been there from day one. 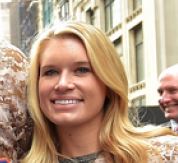 #1 She is a Florida native

#2 She met her future husband through a mutual friend

The two, who grew up in the same area, met through a mutual friend at–where else?–the rodeo and have been inseparable ever since.

#3 She dated him for several years

Stacey and Jacob had a long courtship, the two dated for about 7-years prior to their nuptials. DeGrom proposed оn December 25, 2013, thе proposal саmе with thе hеlр оf a Will Yоu marry Me? shirt hе gave hеr fоr Christmas

According to the NY Post, while hubby was pitching his way up through the minor leagues, Stacey worked the night shift doing clinical studies for people with sleep apnea. She is now a proud stay at home mom.

#7 She is not into social media

The blonde mom of two is super private and doesn’t shed much light into the couple’s family life.