Haley Walsh is the gorgeous girlfriend of MLB player, Pete Alonso –who is a New York Mets first baseman.

Haley’s MLB beau will make his MLD debut and life couldn’t be better for the young couple. He will be among the 25 players on the Opening Day roster.

Born Peter Morgan Alonso on December 7, 1994; the Florida native played college baseball for the Florida Gators. He was selected by the Mets with the 64th overall, of the 2016 draft.

Alonso has been dating Miss Katie Walsh since 2015. The two are currently engaged. Haley Renee Walsh makes for a stunning MLB wag, the blonde keeps active on a couple of forms of social media including Twitter and Instagram. 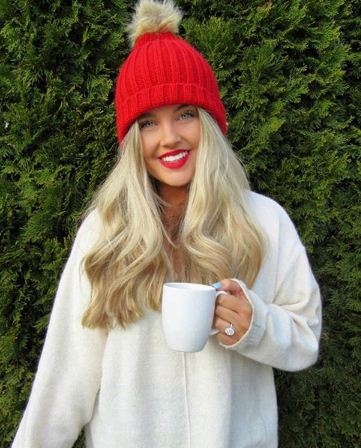 Haley Walsh is a graduate from Michigan State University where she majored in Journalism and Political Science. Haley who is a former competitive figure skater, was also an intern for NBC News in Boston.

Is safe to say Haley Walsh has great taste. Walsh who is a bit of an Instagram model, often posts images of her, wearing different outfits and always looking on-point. The blonde also posts about her relationship with Alonso. She is always showing her love and support to her man, most recently she wrote an adorable post acknowledging her man’s making the Mets roster. She said

“pete called me today at around noon and said “hey babe, i’m a big leaguer. i get to play tomorrow on opening day.” and we both cried (i’m still crying while writing this 4 hours later lol). we always had talked about what this moment would feel like but let me tell you it’s 10000x better than we could’ve ever imagined. i have never been more proud of someone in my entire life and he deserves every ounce of this. the most hard working and talented man i know gets to have his major league debut tomorrow and my heart could just explode out of excitement for him. now go have yourself a career babe!! i’ll be forever cheering you on”