Guess who is married to Josh?

Maria Macias is the lovely wife of MLB player, Josh Hader -currently a pitcher for the Milwaukee Brewers.

Maria’s all-star closer hubby was selected by the Baltimore Orioles in the 2012 MLB draft. He joined the Brewers in 2015 following at least two trades.
The Maryland native born Josh Ronald Hader on April 7, 1994; also played for the United States national baseball team in the Pan American Games.

The 25-year-old has been one of the most effective relievers in baseball since his debut in 2017. The 2x All-Star and 2x winner of the National League Reliever of the Year Award -became a married man this year.
He and longtime girlfriend, Maria Macias recently tied the knot. The young couple said their I do’s on November 30th. 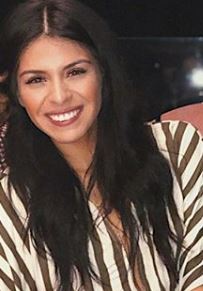 Maria Macias who now goes by Maria Hader hails from Corpus Christi, Texas. She and her man are currently based in New River, Arizona.
Maria is certainly her hubby’s number one fan and supporter; the couple was in fact, tested last year when Josh had to apologize after racist and homophobic tweets he made years ago, surfaced. Macias at the time stood by his side.
The two first met in 2013 when a bold Hader sent her a direct message on Twitter. The dark haired beauty was at the time, a marketing/promotions assistant for the Houston Astros’ Double A team, the Corpus Hooks, where Hader was playing.

One of the things that makes Maria Macias now Hader a pretty cool MLB wag, is that she like her man, enjoys sports. In fact, she told TMJ4, that she majored in Sports Business, having originally majored in Exercise Science. Since her freshman year, Macias has been working in the industry.
According to her LinkedIn page, Macias graduated Texas A&M University-Kingsville in 2017. In addition to her work with the Corpus Hooks, Macias has worked for the Arizona Women’s Golf Association and KRIS Communications.

Congratulations to the newlyweds!