Kelsey Pederson is the lovely wife of MLB player, Joc Pederson –currently an outfielder for the Los Angeles Dodgers.

Following the 2010 MLB Draft, he decided to sign with the Dodgers rather than play at USC. He began his career with one of the Dodgers’ farm teams, the Ogden Raptors, and was named a Rookie League, Pioneer League, and Baseball America Rookie All-Star.

He debuted with the Los Angeles Dodgers in 2014 and helped the team reach the World Series in 2017.

There’s no doubt Joc’s biggest fan is his wife, the lovely Kelsey Williams now Kelsey Pederson. The two dated since 2015 prior to their 2017 nuptials. The two met while growing up in California. 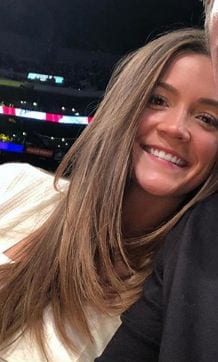 Kelsey was born in Raleigh, North Carolina, however, her family moved to California and she was raised in Pleasanton.

She attended Amador Valley High School in California; and later enrolled at Duke University, where she played volleyball throughout her four years there.

She was the setter for Duke University’s Blue Devils women’s volleyball team. She also briefly worked as an assistant coach for the team in 2015. Kelsey Pederson holds a Bachelor’s degree in educational psychology and a Bachelor of Arts in psychology and elementary education from Duke.

As an interesting fact, one day in 2015, while Joc was driving to the San Francisco Bay Area, where he grew up, a detour took him through Santa Barbara. Struck by the city’s beauty, he texted Kelsey and said to her: “I’m going to get married here someday.” They exchanged vows in front of 250 guests at the Villa Sevillano in Santa Barbara.

The couple recently welcomed their first child together. Kelsey Pederson gave birth to a baby girl –whom they named Poppy Jett Pederson –weighed in at 7 lbs, 11 oz.

The MLB Wag and mom is not into social media, is safe to say she keeps a low profile and enjoys her privacy.