You are here: Home / MLB / Who is Justus Sheffield’s Girlfriend?

Justus Sheffield, a top pitching prospect for the Yankees has just been promoted to Triple-A. Whoever his girlfriend is, must be super excited for him.

Sheffield was born Justus Kane Sheffield on May 13, 1996. The Tullahoma, Tennessee native played baseball while attending high school. He tossed multiple no-hitters and finishing his senior year with a 0.34 ERA. –and was committed to play at Vanderbilt.

He was drafted by the Cleveland Indians in 2014. He was traded to the Yankees in 2016 after having played with the Lynchburg Hillcats. He finished the 2016 season playing with the Tampa Yankees until arriving with current team, Trenton Thunder. 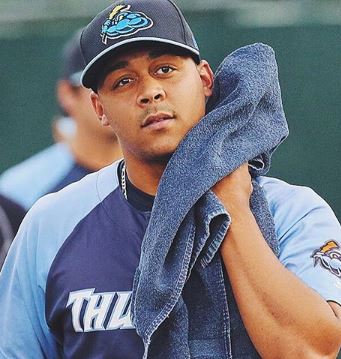 The Pitcher in the New York Yankees organization was acquired in the middle of the previous season and just touched Double-A for the first time right at the very end of the season in 2017.

Last season was one of triumph and adversity for Sheffield, who made 17 strong starts with the Trenton Thunder before an oblique injury, and his first career trip to the disabled list, derailed the year.

In Sheffield’s last start with Double-A Trenton, the 21-year-old lefty struck out nine in six shutout innings. He posted a 2.25 ERA in five outings for the Thunder. Earlier this year he was ranked by MLB as the No. 3 prospect in the Yankees organization and No. 41 overall in baseball.

Sheffield’s whose brother Jordan is a pitcher with the Dodgers organization –is hoping to make it to the big leagues this season. He also has a younger brother named Jaxon.

Justus who appears to be currently single is very close to his family; that would include, mom Misty Sheffield, his two brothers and his dad, Travis Sheffield. His mother is a respiratory therapist. The close knit family faced hard times when Justus was arrested in 2015 for underage drinking. He was 18 at the time.