Jessica Knoles is the gorgeous girlfriend of MLB player, Aaron Hicks -whom you probably know as the center field for the NY Yankees.

Jessica’s boyfriend has been in the MLB for six years and last night, the 29-year-old reminded us why. Hicks’ incredible catch stole an extra-base hit and sealed the Yankees’ wild 14-12, 10-inning victory over the Twins on Tuesday night at Target Field, in what immediately became a contender for the best game of the year.

Born October 2, 1989; the Long Beach, California native was named a Rookie All-Star by “Baseball America” in 2008. He was a first-round Major League Baseball pick and was drafted straight out of Wilson Classical High School (Long Beach, California) in 2008.
The baseball center fielder debuted with the Minnesota Twins in 2013. In 2016 he joined the New York Yankees.

Hicks who keeps a low profile, has been in a relationship with the lovely Jessica Knoles. 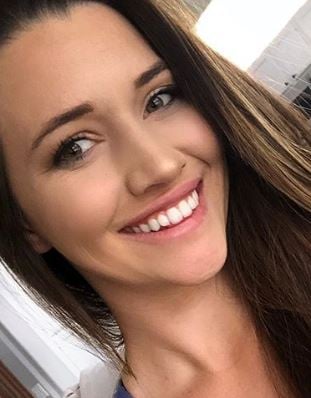 Miss Knoles is a fitness model and nutrition counselor. She currently is a nutrition counselor for Hi-Health; before that, she was a Brand Ambassador for Power Crunch Protein and a server at PF Chang. The brunette stunner also offers on social media At-home and in-gym workout plans.
Jessica was born September 8, 1993; the Arizona native is the daughter of Patricia and Michael Knoles. Jessica grew up alongside two sisters, Kelsi and Bailey. She and her younger sister Bailey often work together.

Jessica attended Arizona State University where she graduated with a Bachelor of Applied Science, Nutrition and communications in 2016.
Is not exactly clear when Jessica and Aaron began dating, however the couple have already become parents so their relationhsip is pretty serious.
Jessica Knoles gave birth earlier this year to an adorable son Aaron Jr. She and Aaron became first time parents on January 14, 2019.

Find the beautiful mom of one on Instagram here.