Jessica Gardner is the stunning wife of MLB star, Brett Gardner -best known for his long tenure with the New York Yankees.

Jessica’s MLB star husband needs little introduction, he’s been in the MLB for 13-year, all as a Yankee.

Born August 24, 1983; the Holy Hill, SC.; native played college baseball at the College of Charleston. He competed in the Minor Leagues with the New York Penn League. He won the Fielding Bible Award for best defensive left fielder in 2010.
Brett eventually began his big league career with the New York Yankees in 2008.

At 37, seem like Gardner may have all he could want, success and a beautiful wife and family. Want to know more about his better half, Jessica Gardner? The blonde who has been married to the outfielder for over a decade, is widely known for being the wife of Brett Gardner. Check out her top facts below.

1. She hails from Georgia

Jessica Gardner if the former Jessica Clendenin, according to reports, she was born in the Georgia State. She was born July 8, 1984, her dad is Thomas E. Clendenin. Jessica was raised along two brothers; John and Joshua.
John Clendenin attended Harrison High School, studied at The University of Tennessee at Chattanooga and worked at Coastal Carolina University.

Joshua Clendenin attended Harrison High School, studied General Business at Stetson University. Also attended College of Charleston, Northwest Florida State College and most recently, Shorter College -where he was a graduate assistant for the Shorterhaws Baseball Team.
According to his social media, Joshua is a former Assistant Baseball Coach at University of West Georgia. He is married to Jobria Clendenin and the couple are the parents of one daughter.

2. She has been an MLB wag for over a decade 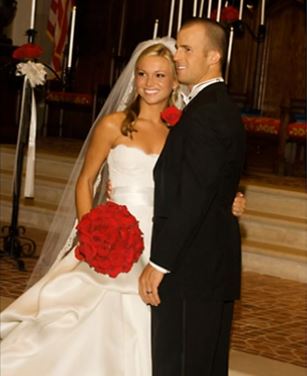 Jessica and Brett tied the knot on December 1, 2007; at 1st Presbyterian Church on Peachtree, followed by the reception at the Piedmont Driving Club in Atlanta.

During their 13-year marriage, Jessica and Brett have welcomed two sons; Hunter and Miller.

4. She is extremely private

Jessica Gardner has become quite recognized for being an MLB wag, some even describe her as a celebrity thanks to her life long link to the baseball legend. However, the lovely blonde who has been pictured numerous times attending red carpet events by the arm of her man, is perfectly ok with leaving the spotlight all to MLB player. Instead, Jessica enjoys her privacy and has kept a low profile since day one, so much that she also shies away from social media. It’s safe to say, Jessica keep busy keeping the order at home and caring for the couple’s two young sons.

5. There’s a crazy fan after her husband

Earlier this year, Jessica’s hubby had to filed for a restraining order against a fan who called herself his ‘future wife.’ According to reports a woman by the name, Gina Devasahayam, claimed the Yankee sent her “signals” from the field.
The deranged fan, who has never met Brett said she started going to games after “three years of romancing online”
While discussing her dispute in an interview, Gina was reminded of the existence of Jessica Gardner to which she replied “That is not of importance.”