Shelley Vargas is the proud wife of professional baseballer, Jason Vargas. Her man is a MLB pitcher currently signed to the New York Mets.

Shelley’s MLB stud previously played with the Kansas City Royals and had a career-high 134 strikeouts in 32 starts. He has a career 4.17 ERA over 12 seasons in the big leagues, also playing with the Marlins, Mariners and Angels. His two year-deal with the Mets is for a reportedly $16 million.

Vargas, a California native born February 2, 1983 –made his MLB debut in 2005 after he was selected by the Florida Marlins in the 2004 MLB Draft.

This will be Vargas’ second stint with the Mets. The first was brief as he was beset with injuries and made two appearances in 2007.

During the 2015 season, Vargas suffered an elbow injury that required Tommy John surgery, and he missed the postseason. He returned to make three starts the following year. Through the ups and downs, his lovely wife has been there for him. 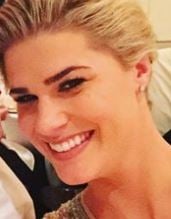 Shelley Vargas and the left-handler have been together for a long time. The couple were high school sweethearts and following their nuptials have welcomed three children.

Like her man, Shelley is also from California, she was born Shelley Ann Watson. Since meeting Jason while attending Apple Valley High School, the two have been pretty much inseparable. She has followed him to wherever his MLB career was taking place including Phoenix, Arizona; Seattle, Washington and Palm Beach, Florida.

When not being a supportive wife attending games to cheer for her man, or participating in events involving wherever team her hubby is playing for –Shelley Vargas is busy taking care of her three kids, sons Joshua and Lucas; and daughter, Elizabeth.

Shelley who is in her early 30’s also keeps active on social media. Check her out on Facebook here.