Heidy Chirinos is the lovely wife of Baseball professional player, Robinson Chirinos -a catcher currently signed to the Houston Astros.

Heidy’s hubby was born Robinson David Chirinos González on June 5, 1984; the Venezuelan native signed with the Chicago Cubs as a nondrafted free agent out of Venezuela in 2000. He made his MLB debut in 2011.

The Venezuelan began his career in the Rookie League at 16 years old in 2001. He made it through the ranks of Single-A, Double-A and Triple-A, spending 10 years in the Cubs system before finally getting his MLB debut with Tampa Bay in 2011.

He joined the Rangers in 2013, and played for the Venezuela national baseball team at the 2017 World Baseball Classic. And last December Chirinos signed a one-year contract with the Astros.

Robinson has been happily married for over a decade to the lovely, Heidy Chirinos. The two tied the knot in 2006, meaning they’ve been married for 13-years now. 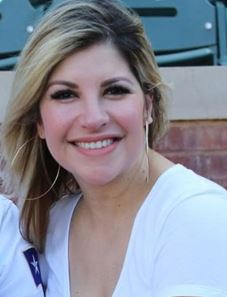 Since their nuptials, the couple has welcomed two children. She is the mother of the couple’s two sons, David and Julian. The couple welcomed second son Julian in March of 2018.

Heidy Chirinos, a proud MLB wag and mother of two has also kept an active life in her MLB spouse duties. She’s been involved in charity, specifically with the Arlington Life Shelter. The blonde and her man served over 90 Thanksgiving meals at the Shelter in 2017.

They also teamed up with the Rangers for the 5th annual Toy Drive in conjunction with Cowboy Santa’s which provides toys to children from low-income families during the holiday season.