Amy Crawford is the loving wife of MLB player, Gerrit Cole –whom we know best as a current player with the Pittsburgh Pirates.

Amy’s hubby was born Gerrit Alan Cole on September 8, 1990. The Newport, California native played college baseball at UCLA, before being selected with the first overall pick in the 2011 MLB Draft.

He was previously selected by the New York Yankees in the first round of the 2008 MLB Draft but he chose to attend UCLA instead.

He joined a Pirates rotation in 2013, the right-handed power pitcher made his MLB debut that same year for the Pittsburgh Pirates. 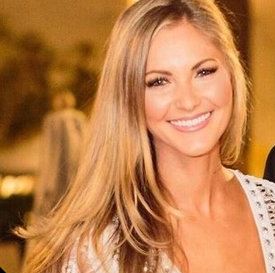 Amy was one of four children born to Mike and Lynn Crawford. She has two sisters, Kaitlin and Jenna; and one brother, Brandon –who is the Brandon Crawford, shortstop for the San Francisco Giants.

Sister Jenna played softball at Foothill High School in Pleasanton, California and is currently a player at UCLA.

Amy Crawford was a student athlete at UCLA when she met Cole. The blond was actually a softball player for the school’s team. She started 45 games in the outfield during her four-year career and helped the Lady Bruins to a national championship in 2010.

Long story short, Amy met Cole, fell for each other, became engaged in 2015 and were eventually married on November 12, 2016 at the Bacara Resort and Spa in Santa Barbara. Now the blonde beauty goes by Amy Cole.

She announced her engagement on Instagram writing: “The best things in life really do come in perfect time – Gerrit, you’ve made me the happiest girl in the world. Today, and every day that came before and every day that follows – I love you. Can’t wait to spend the rest of my life with you by my side.”

Amy keeps active on social media, check her out on Instagram here.