Gabriela Otero is the lovely girlfriend of MLB player Christian Vazquez –currently a catcher with the Boston Red Sox.

Gabriela’s MLB stud was born Christian Rafael Vazquez on August 21, 1990; the Puerto Rican native attended the Puerto Rico Baseball Academy and was subsequently drafted by the Red Sox in 2008.

He made his MLB debut in 2014 as a starting catcher with the Chicago White Sox. The 28-year-old started the season as the primary catcher for the 2018 Red Sox. Earlier this year he underwent surgery on his fractured right pinkie finger.

Aside from his career, Vazquez has also been in a happy relationship with fiancé Gabriela Otero. The two are planning a 2019 wedding. Vazquez is certainly proud of his gal and he often shares photos of her and with her having a good time. 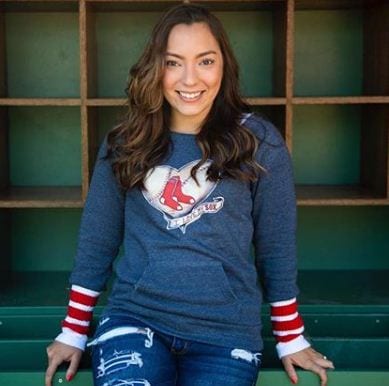 The lovely Gabriela Otero is also a Puerto Rican native. According to her LinkedIn, she holds a Master’s degree in Government and Public Policy, from the Inter American University of Puerto Rico. She previously studied her Bachelor’s Degree, Political Science from 2011 until 2016 at Universidad de Puerto Rico.

She is currently listed as an Administrative Assistant at Best Group Insurance. She also writes on her profile “During my bachelor years, I worked at Champs Sports and as an Assistant to Hector Ferrer Rios, Esq.  This gave me the opportunity to know the world from two different sides.  My responsibilities were many, from face-to-face customer service and assisting on the floor, unto writing motions, visiting the Court House and running an office. These experiences allowed me to achieve a strong Time Management and organizational skills.”

There’s no doubt that Gabriela Otero is much more than what it meets the eye. She’s the definition of beauty and brains.