You are here: Home / MLB / Who is Gabe Kapler’s New Girlfriend?

Gabe Kapler, the former pro baseball star turned MLB Manager and who until recently served as the manager of the Phillies, appears to be currently single.

Gabe who became the manager of the Philadelphia Phillies in 2018, has been fired after two disappointing seasons reports say.

He was the was a 57th-round draft pick in the 1995 MLB Draft by the Detroit Tigers, in 1999 he signed with the Texas Rangers and in 2002 with the Colorado Rockies.

Kapler joined the Boston Red Sox in 2003, and the Yomiuri Giants in 2005, going on to Milwaukee Brewers in 2008 before playing his final years as a pro MLB player with the Tampa Bay Rays staying with them until 2010.

Gabe Kapler  signed with the Dodgers in January 18, 2011, but was released two months later.
He spent 12 years in the MLB as an outfielder, playing for six different teams; winning his only World Series title as a member of the Boston Red Sox in 2004. 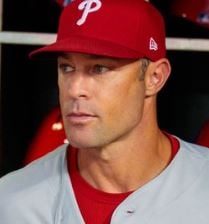 In 2012 he became a coach for the Israeli national baseball team in the 2013 World Baseball Classic qualifier and in August, 2013 he became FOX’s Sports 1 newest analyst.

Kapler, a father of two used to be married to Lisa Jansen. The two were married from 1999 until 2013. Together they are the parents of sons, Chase Ty and Dane Rio.

Kapler, became a single man again in 2013 and moved to Philadelphia.  During the winter 2014 the Phillies hired him and is widely known as ‘The Body’ due to his extremely fit body. Kapler who has kept a toned, muscled body has been feature on various fitness magazines. With his talent and physique is hard to imagine the 44-year-old is single.