Ellen Kershaw is the loving and supportive wife of MLB player, Clayton Kershaw –currently a pitcher for the Los Angeles Dodgers.

Ellen’s hubby is a Texas native born March 19, 1988 as Clayton Edward Kershaw; the 30-year-old has played with the Dodgers his entire professional career.

Clayton was drafted by the Dodgers straight out of Texas’ Highland Park High School, he skipped college and joined the minor leagues. After winning the NL Cy Young in 2011, he had another stellar season leading the majors in ERA in 2012 for the second season in a row.

He tied the knot to Ellen Melson now better known as Ellen Kershaw back in 2010. The two met while attending high school and dated for several years prior to their marriage. 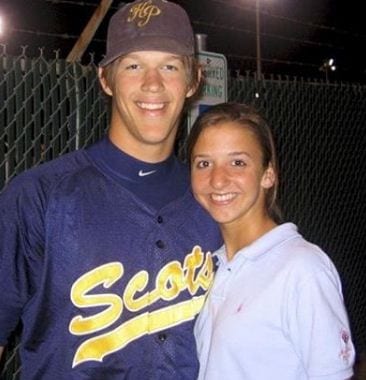 While her man did his thing with the Dodgers, Ellen attended Texas A&M. Clayton popped the question when he was 21. They tied the knot in December 2010.

Since then, Clayton and Ellen Kershaw have welcomed two children together, Cali and Charley. Ellen, also a Texas native is the creator along with her husband of the “Kershaw’s Challenge” –a charity to help children in need. They are both big on charity work. The couple also wrote a book to raise money and build an orphanage in Zambia.

Ellen Kershaw has always been passionate about working with underprivileged children in Africa. Kershaw’s Challenge has grown extraordinarily since its inception and now works in Los Angeles, Dallas, Zambia and the Dominican Republic.