Kelli’s MLB star husband has spent his entire 12-year career with the Boston Red Sox, earning the AL Rookie of the Year title in 2007 and winning AL MVP in 2008. He’s also a two-time World Series champion, since he won in 2007 and 2013.

Dustin, now in his mid-30’s has been happily married to college sweetheart, Kelli Hatley for over a decade. The two met while attending Arizona State University and tied the knot on Nov. 11, 2006. 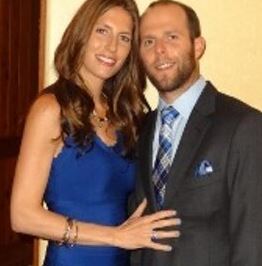 Kelli is the proud mother of the couple’s three children, three boys named Dylan, Cole and Brooks Pedroia. Aside from being a proud MLB wag and busy mom of two, Kelli who goes by Kelli Pedroia is also a cancer survivor. At 18, the Chicago native was diagnosed with stage two melanoma after years of attending tanning parlors and wearing no sunscreen.

According to an interview she gave to the Boston Globe, she noticed a red, asymmetrical mole on her right thigh after returning from a spring break trip to the Cayman Islands. The doctor removed it, and when the lab results came back, they were as shocked as she. Her doctor told her he’d never seen anyone so young with stage two melanoma.

Pedroia was sent to an oncologist for scans and to a surgeon who took a “large egg-size chunk” of lymph nodes out of her leg, leaving her with a three-inch scar. Two years later she had another atypical mole removed from her clavicle, and back in 2007, one from her breast.

These days, the MLB wag and mom is all about “eating healthy, working out, and loading up on sunscreen, and finding an umbrella or shade.” The family of five split their time between Arizona and Boston.