Mara’s professional athlete husband has been placed on administrative leave after reports say he is currently being investigated for domestic violence.
Germán has served as a rock in the rotation, notching a team-leading 18 wins while pitching to a 4.03 ERA and 1.15 WHIP.

The 27-year-old was born August 4, 1992; in San Pedro de Macoris, Dominican Republic. He began his career in the minors with the Florida Marlins as an international free agent in 2009. During that time, he played for the Dominican Summer League Marlins and the Greensboro Grasshoppers.

German made his MLB debut wiht the Yankees in 2017, the team previously had him on their 40-man roster in the 2015 season, designated him for assignment in the offseason while he was rehabbing from Tommy John surgery, and then won a bidding war to re-sign him before re-adding him to the roster. 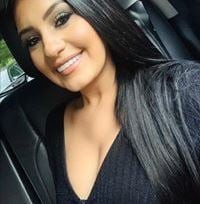 The Yankees acquired German before the 2015 season in a five-player deal, however, he missed 2015 due to Tommy John and his 2016 innings were limited by an ulnar-nerve issue that arose in the spring.

German has been in a romantic relationship with a lovely brunette by the name of Mara Vega. Details of how the two got together are not clear but it is believed the two are in a serious relationship and may even be already married.
Judging by their social media, its clear the couple have two kids together.

Mara Vega gave birth to a son in 2018, they named him Gian A. German. The two are aleady parents to a young daughter named Chrisgelyann. The MLB wag and mother of two is active on social media. The dark haired/curvy beauty has shared a number of adorable family photos on Facebook which makes it pretty hard to imagine she and German are having major trouble at home.
Is not exactly clear what Mara does for a living but for now, is safe to say she keeps busy caring for her two young children.