Dayara Diaz is the wife of MLB player, Aledmys Diaz -whom you probably recognize as a shortstop with the Houston Astros.

Dayara’s MLB hubby was born Agosto 1, 1990; the Cuban native played ball in Mexico City for a year and a half while waiting to be eligible for the majors after defecting from Cuba in 2012.
Before the Cardinals scooped him up, he played for the Naranjas de Villa Clara in the Cuban National Series for more than five years.

The Cardinals initially signed him as a free agent in 2014. He was an All-Star selection in his rookie season with the St. Louis Cardinals in 2016. Since then, he’s also played with the Toronto Blue Jays.

Off the field, the 30-year-old is taken off the market. He is married to Dayara Diaz, want to know more about her and the couple’s life? Check out her top facts below. 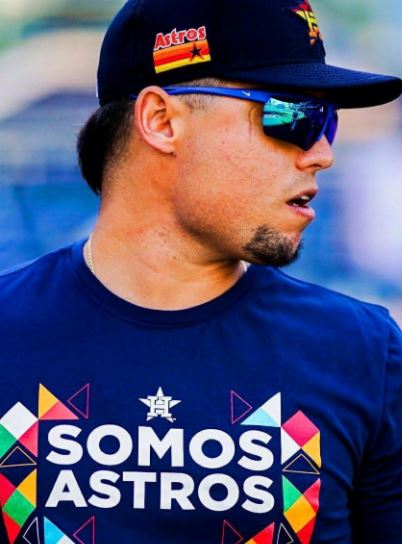 1. She is also Cuban

Like her famous husband, Dayara was also born and raised in Cuba. In fact, she lived in her native country until a few years ago. Aledmys, who was at the time her boyfriend, left Cuba in 2012 to pursue baseball professionally. At the same time, Aledmys left his family and girlfriend behind.
Is not exactly clear how or when exactly the couple reunited but they are currently husband and wife.

Since their nuptials, the couple has welcomed one child together. They have a son named Nathan, who was born on August 5, 2016. During 2016’s All-Star game Dayara who was eight months pregnant at the time, had to watch the game from the pair’s home. During the offseason, Dayara and her family live in West Palm Beach, Florida.

3. She is super private

Despite being married to a famous professional athlete, Dayara Diaz keeps to herself, she is pretty much unknown to the world. Is safe to say the MLB wag and mom keeps busy caring for the couple’s kid and doesn’t care much about fame or glamour. She is perfectly ok with leaving all the attention go to her husband as she leads a low profile as a full time housewife.

4. Aledmys gives credit to his wife

During an interview in Spanish, he spoke how during the quarantine he had been spending more time with his family and his son. He went onto say

I have a three year old boy, how do you keep a boy of that age entertained all day at home? -he said in between laughter-. I have to give a lot of credit to my wife, who is running after him. Also this time has given that possibility to spend more time with the family and it is something that we must appreciate. Enjoy my child, watch him grow: I am enjoying it a lot.

Since Dayara Diaz is quite the private person, is natural that she doesn’t do social media either. She isn’t active in any social media platform and the same goes for her MLB player husband.