Carli Skaggs is the devastated wife of MLB player Tyler Skaggs -the Los Angeles Angels pitcher who died on Monday. He was 27.

Carli’s husband was found unconscious in a Hilton Hotel room at 2:18 p.m. He was pronounced dead at the scene. Tyler who was in Texas at the time of his death had traveled whit the team to begin a four game series against the Rangers. The game was postponed and the cause of death remains unknown at this time.

Tyler Wayne Skaggs was born in the Los Angeles neighborhood of Woodland Hills, in the far western part of the sprawling San Fernando Valley. He graduated from Santa Monica High School in 2009, when the Angels drafted him in the first round.
Skaggs had been a regular in the Angels’ starting rotation since late 2016. He struggled with injuries repeatedly over the past three seasons but persevered to become a valuable starter in Los Angeles’ injury-plagued rotation. He started 15 games, going 7-7.

The MLB pitcher is survived by his parents and wife, Carli Skaggs. 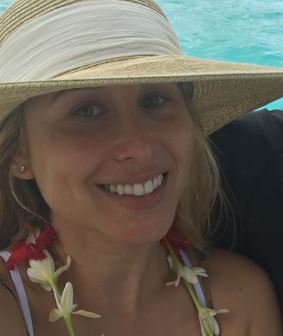 Tyler and wife Carli were newlyweds having tied the knot during the offseason in 2018. Tyler who was active on Instagram was often vocal about his love for wife Carli; often referring to her as the love of his life.

Skaggs popped the question to Carli in Bora Bora, on November 9, 2017, and they married in December 2018.
Carli Skaggs was born Carli Samanta Miles on January 25, 1987; her parents are Nina and Alan Miles. She as older brother, Skylar.
The blonde who graduated from Loyola Marymount University; has been pretty private but its known she is involved in luxury travel. Carli Skaggs runs a luxury travel agency along with her mother, Nina.

Her own social media adverts “Nina & Carli. [TRAVEL TEAM] ?‍? Mother/daughter Luxury Travel Advisors.” The page promises “Personalized, custom vacations.”
She also has her own website called, Miles2Travel -in the about section reads “Nina & Carli Miles draw upon their own travel experiences to provide first-hand recommendations and deliver expertly crafted itineraries to their clients. Specializing in far-reaching corners of the world, they remove the guess work from the planning process and provide exclusive travel perks and VIP treatment through their industry relationships”