Carissa Darnell is the lovely girlfriend of MLB player, Caleb Ferguson –currently a pitcher with the Los Angeles Dodgers.

Carissa’s beau was a 38th round pick from 2014 out of high school in Ohio. The Columbus, Ohio native was born July 2, 1996. Ferguson, had Tommy John surgery as a senior in high school and had committed to play college baseball at West Virginia.

Caleb ditched playing college baseball at West Virginia University and instead singed with the Dodgers in 2015. The same year he made his pro debut with the Arizona League Dodgers. Ferguson started this season in Double-A and has made just two starts at the Triple-A level.

In 2017 he was pitching for Rancho Cucamonga in the California League.

He was promoted to the big leagues earlier this year. He made his debut as the starting pitcher over the summer.

Ferguson has been dating blonde babe, Carissa Darnell for a while now. Could she be the one? 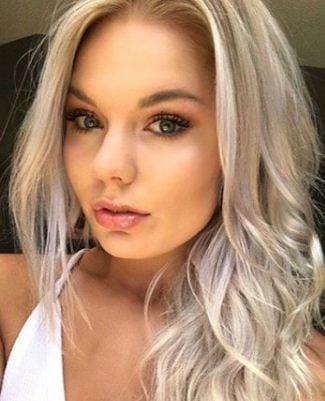 Carissa Darnell is originally from Vinton County, Ohio. She is the daughter of Cristy Hall and the late, William C. “Bill” Darnell. She has one older brother, Ryan Darnell. According to an obituary, her father passed aged 51 in 2011.